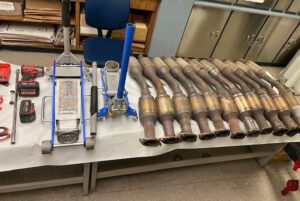 An alert resident called 9-1-1 after witnessing the theft of a neighbor’s catalytic converter in the 2500 block of Harbor Blvd. The witness gave a suspect vehicle description and said it was last seen leaving the area onto Harbor Blvd. Ventura Police Officers responded and canvassed nearby neighborhoods. A patrol sergeant located the suspects and caught them in the act of committing another catalytic converter theft in the Portside Ventura Harbor neighborhood. The suspects failed to obey commands and fled in their vehicle at a high rate of speed. After a short vehicle pursuit, the suspect vehicle crashed when failing to negotiate the turn onto Seaward Avenue. All three suspects were taken into custody. They had minor injuries from the collision and were taken to a nearby hospital for medical treatment. The three juvenile suspects were from the Los Angeles area. They will be booked in juvenile hall for Conspiracy, Grand Theft, Possession of Burglary Tools, Vandalism, and Possession of Stolen Property. The driver will also be booked for Vehicle Evading.

On Nov.27, the Ventura Police Department Command Center received a call regarding an armed robbery at Wild Tobacco & Gift Shop, 9493 Telephone Rd. Two suspects entered the establishment wearing facemasks, pointed firearms at the victim, and tied him up. They then took an undisclosed amount of money and fled the store into an awaiting vehicle. The clerk was able to free himself and call 911.

Ventura Police Department Patrol officers located the vehicle and initiated a high-risk stop. Two subjects fled from the scene, Jason Hoyland and one other white male. Two other subjects, Angel and Patterson, were detained at the vehicle and taken into custody without incident. One firearm was found in the car and was determined to be a replica rifle. A search was initiated using Ventura Police Department, Ventura County Sheriff’s Office K9s, and the VCSO’s Air Unit. After a search, Jason Hoyland was taken into custody without incident. The remaining suspect is still at large and was described as a white male with tattoos on his head and neck.