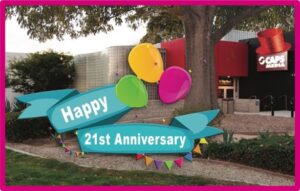 I am the Executive Director of CAPS Media, or as we are officially known: Community Access Partners of San Buenaventura. 2021 marks the 21st anniversary of CAPS Media serving the city and public throughout Ventura. In honor of this momentous occasion I thought it would be appropriate and informative to share A Brief History of CAPS Media.

The CAPS Media saga starts in 2000 when a group of community minded citizens came together with a common goal: to create a media center for Ventura residents, to encourage civic engagement, provide access to information and a platform for expressing desires, ideas, and opinions. The collaboration evolved into the formation of a nonprofit corporation named Community Access Partners of San Buenaventura, more commonly known as CAPS Media.

The project utilized a Federal Communications Commission (FCC) ruling that required cable operators to set aside certain stations for public, educational, or government use. As outlined in the FCC regulations, these PEG Channels, as they are called, provide citizens a vehicle for public discourse and, as such, provide First Amendment protections for those speakers.

“Public access channels are often the video equivalent of the speaker’s soap box or the electronic parallel to the printed leaflet.

They provide groups and individuals who generally have not had access to the electronic media with the opportunity to become sources of information in the electronic marketplace of ideas. PEG channels also contribute to an informed citizenry by bringing local schools into the home, and by showing the public local government at work.”

Establishing the nonprofit was only the first step. Fundamental to the effort was the goal to establish an independent broadcast homes for CAPS both in the community and on television. It took the determined founders more than five years to work out the agreements. In the end, a very innovative game plan was devised that combined resources from the City of Ventura, the Ventura County Community College District, and the two cable companies operating in Ventura: Avenue and Adelphia Cable (subsequently Charter, Time Warner, and Spectrum). The City provided partial funding, VCCCD contributed the land for the construction of a media center, and the cable companies added additional funding and most importantly, contributed two broadcast television channels on the lower band: Channel 6 and Channel 15. These low numbered channels were extremely valuable and coveted “electronic real estate” at the time.

In September 2005 the “partners” broke ground for a state-of-the-art media center at 65 Day Road on the east side of the Ventura College campus. Fifteen months later, after countless revisions, setbacks, compromises and adjustments the CAPS Media Center opened to the Ventura community on January 18, 2007.

As a membership-based organization, CAPS Media has grown dramatically since it was launched, continually responding to the ever-changing landscape of community interests, needs and technological innovations. CAPS Media Membership is open to anyone who lives, works or attends school in the city of Ventura. Membership is also available to any nonprofit within Ventura County that serves the city of Ventura, as well as anyone who is a member of a nonprofit organization in Ventura County. To find out how to become a member, go to capsmedia.org.

In the past 15 years CAPS Media has had more than 2500 active Member/Producers. During that time they have created thousands of hours of locally produced, informative and engaging programming, thereby enriching the lives of everyone in Ventura.

In 2017 CAPS Media added online streaming to the distribution vehicles in order to expand the reach of Channel 6 and Channel 15 to those who do not have cable television. In 2018 CAPS Media built an in-house, state-of-the-art, radio studio, launching KPPQ at 104.1fm. The station provides the community with another vehicle for personal and creative expression, as well as information and entertainment. In less than three years, the CAPS/KPPQ team has trained more than 100 local Member/Producer DJs and produced more than 600 hours of original music shows in the KPPQ studio.

Fundamental to CAPS Media’s service to the community is assisting the City government in reaching the community. This includes multiple services including coverage and distribution of all City Council and other departmental meetings. As an example of the extent of these services, during the past year, in the midst of the COVID-19 shutdown, CAPS Media covered more than 100 separate City meetings, totally nearly 500 hours of live broadcast and streaming. At the same time, CAPS Media crews produced more than 220 separate informational and educational videos for the City.

Providing creative production services to other government agencies in the city and county is also a priority for CAPS Media. These include multiple departments at the County of Ventura and the Ventura Unified School District. In 2020 CAPS crews produced more than 300 separate projects for the County ranging from short public service announcements (PSAs) to long-form committee meetings, press conferences, and departmental productions.

CAPS Media is guided and governed by a dedicated board of directors comprised of community members, including various CAPS Media Member/Producers and representatives from the City, County, Community College and VUSD. All of the board members share a strong personal interest in public, education and government programming as well as a passion for community service and freedom of speech.

Funding for CAPS Media comes from multiple sources including cable franchise fees paid to the city with a portion allocated to CAPS Media, plus membership fees, donations and revenue from non-city productions. It may be important to note that CAPS Media does not receive any funding from local City or County tax revenues.

It is a tremendous pleasure to be part of the CAPS Media staff – which is small in size but mighty in its commitment to service. The full time staff members are Elizabeth Rodeno, Donald McConnell, Evan Carpenter, Gary Roll, Jamie Cawelti and myself, with a strong crew of supporting independents: Manny Reynosa, Alex Uvari, Jorge Godinez and Phil Taggart. On average the full time staff members have each worked at CAPS Media for more than 12 years, which reflects the tremendous dedication to our Member/Producers, our community and our mission.

Year in and year out, CAPS Media continues to evolve and flourish providing thousands of hours of creative community service to Ventura. Unfortunately, due to the COVID-19 pandemic the CAPS Media Center is closed to Member/Producers and the public until further notice. However, the CAPS Media staff and crews continue to provide vital services to the community. Despite closure, CAPS Member/Producers can submit programming via the online portal at capsmedia.org for broadcast and streaming on television and KPPQ.

I encourage and welcome everyone in Ventura to join the CAPS Media team as a Member/Producer, volunteer or donor. Help us fulfill our Vision to Engage, Educate and Entertain and to realize our Mission to create an engaged and informed community through participation in electronic media.