If you live in Ventura you know the Trees. Many still call them Two Trees, no matter that Trees come and go. They are simply called Two Trees because we are a town without pretension. Paris has The Eiffel Tower. New York has the Statue of Liberty. Sydney, the Opera House. San Francisco, the Golden Gate Bridge.

For Ventura, Trees are enough.

Like so many seemingly innocuous things, our Trees are fascinating. Some say they were planted as a beacon for seagoing ships, to aid captains in making Ventura landfall. It is said that on certain sailing charts you can still find the Hill of the Trees, marking Ventura. Either way, it is a nice story. Ships ferry romance, and in this day and age of Google Earth the thought of scanning the horizon for trees has a lovely charm.

The Trees’ real story is fascinating, too. In 1898 Joseph Sexton, a horticulturist of note, planted 13 Blue Gum Eucalyptus saplings atop the hill. It’s said he did this for the best of reasons; because he thought they would look nice. Mr. Sexton had an eye for beauty. He had good sense, too. He hired his neighbor Owen Marron to do the planting and subsequent caretaking. In 1898 it was a hellish business hauling water, by horseback and burro, up the steep hillside. 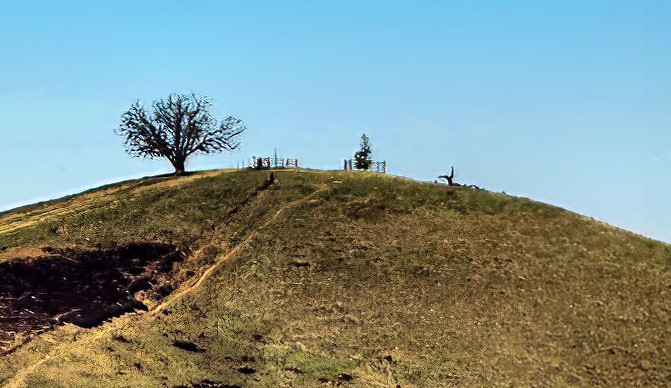 On again and off again, the Trees have been part of Ventura’s story. One year, for their senior prank, the seniors at Ventura High School moved an entire classroom of desks up to Two Trees. One must salute such creativity.

People are drawn to our Trees, though not everyone brings their desk. Our Trees have a hypnotic quality, a far-reaching siren call. Once, after the Trees skirted a fiery disaster, our local paper printed a letter from a woman immensely relieved that the Trees were still there. “I scan the horizon so avidly that my eyes are nearly popping out of their sockets until I finally sight my favorite view …” the woman wrote from her home in Florida.

Trees come and go. This piece was first written when there were indeed Two Trees. But, regardless of number, our Trees remain Ventura’s icon.

Because, regardless of number, their whisper is the same.

It is a special town where the icon dissolves with the sunset.