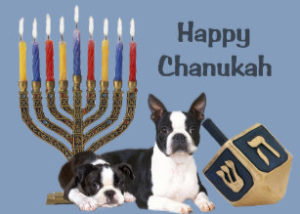 Every year Jewish people around the world celebrate the holiday of Chanukah, the Festival of Lights. Chanukah begins on the 25th day of the Hebrew month of Kislev, but the starting date on the western calendar varies from year to year. This year it started on sundown on Dec.10 and ends on Dec.18.

In the land of Judea there was a mean (boo) Syrian king, Antiochus. The king ordered the Jewish people to reject their God, their religion, their customs and their beliefs and to worship the Greek gods. There were some who did as they were told, but many refused. One who refused was Judah Maccabee(hooray).

Judah and his four brothers formed an army and after 3 years of fighting, the Maccabees were finally successful in driving the Syrians out of Israel and reclaimed the Temple in Jerusalem.

When Judah and his followers finished cleaning the temple, they wished to light the eternal light, known as the N’er Tamid, which is present in every Jewish house of worship. Only a tiny jug of oil was found with only enough for a single day. The oil lamp was filled and lit. Then a miracle occurred as the tiny amount of oil stayed lit not for one day, but for 8 days.

Jews celebrate Chanukah to mark the victory over the Syrians and the rededication of the Jerusalem Temple. The Festival of the Lights, Chanukah, lasts for eight days to commemorate this miracle of the oil. The menorah candles are lit to celebrate the 8 days that the oil stayed lit.

The spellings of Chanukah has caused some confusion. Part of the reason for this confusion may be due to the fact there is no exact English translation of the Hebrew word for Chanukah. So to help clear up some of the confusion here are just a few of the different spellings one might encounter. They all celebrate the holiday.

Chanukah, Chanukkah, Hanuka, Hanukah , Hannukah ,Hanukkah. In the United States it is most common to use the spelling Chanukah.