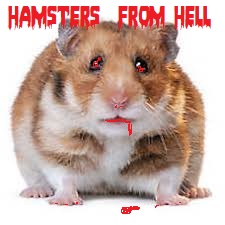 Not long ago the Svengoolie program that shows old horror films ran the classic failure of a film titled “The Night of the Lepus.”  Lepus is Latin for rabbits and the plot is about a heard of giant rabbits attacking a small town in Arizona.  Still, with all the special effects it proved impossible to make the cute, cuddly bunnies look threatening.   It was a fun film with more than a few unintentional humorous parts. But, “Night of the Lepus” did trigger a memory of a happy time when I was working at Cable Six TV, producing a program called “Ghost Hunters” with Phil Taggart. This was in the mid 1980s when such programs didn’t exist in other places.  A young man came to us with a 16 mm film he had made over on the Avenue. It was called “Hamsters from Hell!”

He had constructed a model of Ventura, complete with the old mission. He had several pet hamsters (reflecting back, I think his sisters had them as pets). As close as I can recall, he had recruited several of his friends and family members  as actors and they made this feature.  It was about this young scientist, who was experimenting with hamsters, cages and mazes and such when the small animals were accidentally exposed to dangerous radioactive isotopes. This caused them to grow huge and turn them into man eating monsters–Hamsters from Hell!.

They attacked Ventura destroying all in their path, and feasting on the local residents. Really hamster food painted with food coloring to look like  people.  The animals were bullet proof and nothing could stop them from breaching the Santa Clara River and devouring Oxnard!  The scientist had trained them  to follow him when they were given their food by playing a song (I forget the song).  So, to save the city, he took loud speakers and put them on a boat and played it, the Monster Hamsters, jumped off the pier into the ocean to follow the song and they went further out, they all drowned, ending the menace of the  hamsters from Hell.

Using close ups of the animals with pictures of the people in normal size it sort of worked, in a silly way.  We never showed this local work–I think it was about twenty minutes long–Now, I wish we had. It was so silly, so off the wall, it could have really caught on like silly film “The Attack of the Killer Tomatoes” did for San Diego.  It was a long time ago and I may have forgotten some details of this film. Maybe the film maker, or one of his friends recalls the making of this epic. I would be great to show this film on Halloween night 2020.  If it is lost, maybe it can be recreated by some enterprising young film makers.