I’ve spoken to a number of venue owners the past couple of weeks as they tread lightly doing their best to follow the guidelines in place to operate safely in this time of COVID-19. And without naming names, I know several have had to stop the music (literally) to remind patrons that wearing masks is mandatory in their establishment unless you’re seated at your table. Social distancing is being enforced and whether you think the whole thing is a conspiracy theory or not, it’s their business, literally! They can make up whatever rules they want to secure their venue, but the bigger issue is that they’re actually enforcing what has been mandated by the governor of California. Do you want them to be closed down by code enforcement? Of course not! So, I beseech you to please wear a mask, because if you don’t you’re going to not only put their business at risk, but you could pass along the virus not even knowing you’re a carrier.

We all want to get back to normal. We all want to hang out, and give hugs and hearty handshakes to old friends while taking in our favorite bands, but we’re nowhere near that point yet. If you feel strongly enough about not wanting to wear a mask, then please stay away and listen to music at home. There are plenty of live streaming concerts still being held.

NOT BACK TO NORMAL

Reopening doors, following safety guidelines and trying to get back up to speed may not include live music at this time for a lot of venues. I understand (she says with a pitiful lower lip pushed out trembling ever so slightly). The priority is paying the rent and the staff and rebuilding a clientele. So, don’t forget to support all your favorite music venues whether they have live music or not yet. If we do this right, and we do this together supporting where we can, we will live to see another robust economy with a booming music scene.

And while we’re on the submit of live music in venues, let’s take it from the perspective of the musician. Not all artists feel safe enough to get back out there to play live. Trust me, they want to, but their better judgement is keeping them away for many reasons. You have your favorite bands, and solo artists, well why not reach out via social media where most of them have accounts. Let them know you miss them, and if you can, buy their music and some merchandise if available to show your support. 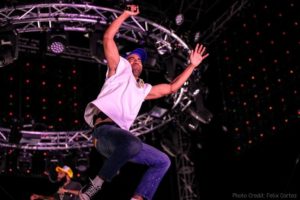 In each of my past four music scene columns I’ve been able to report more details on the Concerts in Your Car events by CBF Productions (California Beer Festival). This past weekend Ventura finally saw a large-scale concert with SuperDuperKyle kicking off the series over the weekend of June 26 and 27. Kyle, a former Ventura High School graduate, was well-received as he gears up for his album release on July 17, See You When I Am Famous.

I’m not going to lie; I am so relieved to hear portable bathrooms are now available as they were not when they first launched this series. Under their FAQ, the Concerts in Your Car website made it clear no restrooms on site, no getting out of your car, and you could not leave the event early. As a female, let me just say “Thank You God!” I just couldn’t wrap my bladder, I mean head around that one! Gratefully, we don’t have to worry about that now.

Back to the business at hand, joining forces with CBF Productions is the Ventura Music Festival as they present John Jorgenson’s Bluegrass Supergroup. On Thursday, July 16. I love that Concerts In Your Car is being so diverse with the genres ranging from rap to bluegrass to alternative rock to country, there literally is something for everyone! And if you are a fan of bluegrass music, then you won’t want to miss Grammy-winning guitarist, John Jorgenson (Desert Rose Band, the Hellecasters) who will be joined by fellow music legends Herb Pedersen (Desert Rose Band, Laurel Canyon Ramblers), Mark Fain (seven-time Grammy-winning bassist) and Patrick Sauber (Laurie Lewis band).

I has a quick Q&A following here, but for more information on all the concerts and movies and for purchasing your ticket got to ConcertsInYourCar.com. 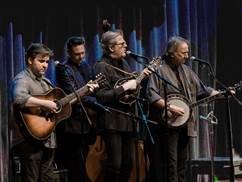 Pam: I’m loving the creativity of our music community; what was your initial response to doing a drive-in concert?

John: Indeed Ventura is a very creative community, and as a musician I feel quite comfortable living here.

When Nuvi Mehta, Ventura Music Festival Artistic Director] asked me to play the drive-in concert for the Ventura Music Festival I was thrilled. I have performed in so many varied venues over my 40 plus years as an entertainer so to get asked to do something new and challenging is rare, surprising and fun. In the last few months most of my contact with my band members has been to cancel or reschedule gigs, so to get to tell them about one that’s actually going to happen was great too.

Pam: What can people expect from your show?

J2B2 is an excellent ensemble both instrumentally and vocally, so people can expect world class singing and playing first of all. Our material ranges from very traditional bluegrass to newer songs from some of the best songwriters of our time. Our goal has been to bring meaningful lyrics into the mix of virtuosic picking and tight vocal harmonies. Hopefully the audience will laugh, wipe a tear or two, think a bit differently, and drive home with smiles on their faces.

Pam: Do you see more of these type concerts on the horizon?

John: Well, I sure hope so! The chance to get out and enjoy a performance from the safety of your own car while still feeling a bit of community and a shared concert experience is extremely rare if not impossible. Here is a way forward!

Pam: Musically speaking, what had you been doing during the shutdown?

John: Since the shut down I’ve been mostly using the time to go through my musical archives of older formats and transfer tapes, as well as organize memorabilia I’ve amassed over the years. I have also done a few remote recording sessions and contributed to a worldwide orchestral and choral collaboration. It’s definitely a time for all performers to rethink and retool.

I spoke to JD Drury just a few weeks ago and being the optimist that he is, he was still holding out that Surf Rodeo could in some form or another be pulled off this summer or late fall, but the word came out shortly afterwards that Surf Rodeo is officially off for 2020; JD hung in there hoping for a miracle, but alas…it wasn’t to be. The official post on social media: “It is with heavy hearts that after several conversations with the City of Ventura and State Parks, due to Covid-19, we will not be able to party on the beach this summer. We love you and we miss you! WE WILL BE BACK 2021!” 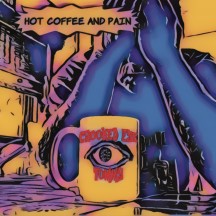 Tommy Marsh dropped off a copy of Crooked Eye Tommy’s sophomore CD, Hot Coffee and Pain which is scheduled for an August release. It was recorded in Ojai at Carbonite Studios with Grammy-winning audio engineer, Jason Mariani (Joe Bonamassa, Robben Ford). You know I’ll be spinning a couple tunes on the Pam Baumgardner Music Hour at CAPS Media’s KPPQ-LP, and we’re working on having Tommy be a guest on the VenturaRockSpot which you can view on the Ventura Rock’s YouTube channel. If you loved their last release, Butterflies and Snakes, well you ain’t seen nothing yet! Holy smokes, they hit this one out of the park! More details coming soon.