The Ventura event was a huge success, creating individual care packages for the homeless.

A little kindness can go a long way in changing someone’s life, and the holidays are a perfect time for gratitude for what one has, and for giving back to those who aren’t as fortunate. A wonderful example of both was found in the annual Helping Hands for Humans event, an organization that now operates in both Colorado and Ventura, inviting local community members to gather to assemble care packages with hygiene products, snacks, and medical supplies for the less fortunate. Each person who attended created their own Ziploc bags with items from a long assembly line of donated products to then take with them and give to those in need. According to the event organizers, this is about much more than creating a care package. “We think that a sense of camaraderie, community, and love instilled in your heart will be what you take away from this experience. Everyone who comes is encouraged to bring their smile, and any extra items they may have for care packages.” 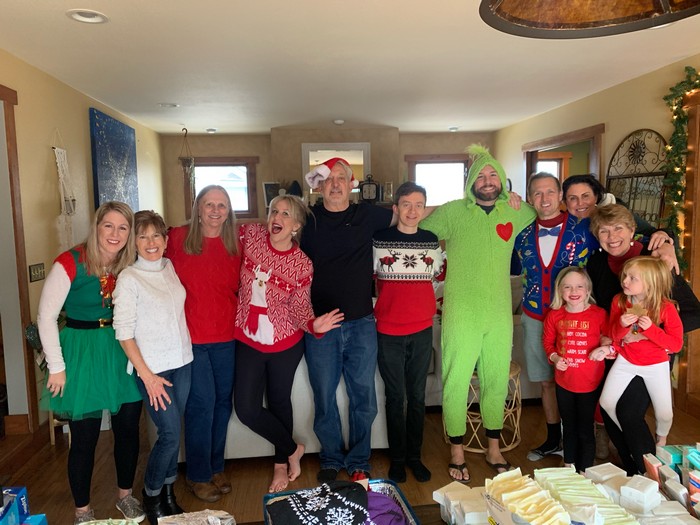 Colorado event was held simultaneously by the founders Ashley Tindall (the blonde in the red sweater) and Clint McBride (in the green hooded Grinch outfit).

Ashley Tindall and her husband Clint McBride saw a need and wanted to make a difference, starting Helping Hands in Denver, Colorado in 2012 before they moved to Ventura the following year and continued the event here. “The Denver winters were unbearably cold. I saw so many homeless people passed out on the streets, freezing and hungry,” said Tindall. “It seemed like they were everywhere, and it hurt my soul at a deep level. It especially hurt me to see the way some people treated the homeless population–like they weren’t humans. The people that made packages and handed them out would always come back and tell me how amazing their experience was and how grateful the homeless person was. It forever changed them, so the event became as much about the people coming to the events as it was about the homeless,” said Tindall.

Sasha Collins joined in to collaborate with the event soon after it began in Ventura and has been co-hosting it with Tindall and McBride every year since. “I was thrilled. I thought it would be a great opportunity to get friends and family together for an event where we could take the focus off of all the mass consumerism that is associated with the holiday season, and instead focus on giving back to our community,” said Collins. The event was held simultaneously in Ventura and Fort Collins Colorado this year, with the two groups engaging and cheering each other on via FaceTime, as Tindall and her husband moved back to Colorado.

Helping others is a family affair. Stephanie Reilly and her 16-year-old daughter Roux, who have participated in helping the homeless in other local organizations, participated this year for the first time. Reilly shared that she felt it was important to show children that many people don’t have the basic necessities. “Homelessness in Ventura is becoming a larger problem. It’s heartbreaking when you see so many at stop signs, and this is just another way we can help,” said Reilly.

When asked what the hoped for takeaways were for the participants, in addition to the care packages, Collins replied, “I am hoping that it gives people a chance to focus on the needs of other people, but I also hope that it inspires people to contribute to their community in a greater way throughout the year as well.”

The events ran simultaneously both in Ventura and Colorado, with organization founders Ashley Tindall and Clint McBride.

“This event is really about igniting the spark of giving to others, to the homeless and in life in general as fellow human beings,” said Tindall.