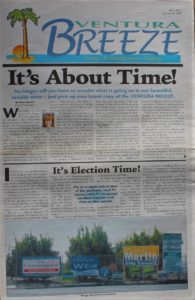 ∙Wow, another fiscal year ending for the Ventura Breeze. Our next issue will be Vol.13 No. 1. Who would have thought that we would still be publishing after all this time in the age of digital news? A tribute to our wonderful readers and advertisers. More about this in our next issue.

∙Reader Zila Hawkins sent me the following request. “I have been hearing cats get taken almost every night by coyotes. I was hoping you would post a notice to make sure that people bring their beloved pets inside every evening and make sure that they are watched if they have to go out at night.”

Happy to do that, a good reminder even though it’s difficult keeping some cats inside. Our cat Savana is an indoor cat and seems to be okay with just looking out the window but some cats are just not happy inside and they’ll spend all day and night meowing and even scratching the door go out so they probably have to be let out and hope that the coyotes don’t get them.

∙First time ever that we have two art pages. Wonderful that Ventura has so many great artists and art events and venues.

∙ Scientists have finally identified the genetic differences associated with left-handedness, a trait found in 10% of the human population.

What’s more, those genetic variants result in differences in brain structure, which might mean that left-handed people have better verbal skills than the right-handed majority.

While previous research into twins has indicated that genes are at least partially responsible for controlling handedness, the new study, conducted by scientists from the University of Oxford and published in the journal Brain, is the first to identify which genetic variants separate the lefties from the righties.

The research could suggest a potential correlation between left-handedness and superior verbal skills, said Akira Wiberg, a Medical Research Council fellow at the University of Oxford who worked on the study.

I think that means that us lefties have a big mouth.

∙The Thousand Oaks City Council has voted unanimously to allow a second medical marijuana dispensary to open in T.O. It will be operated by Leaf Dispensary, if it secures the needed permits. In July, 2018 the council selected Thousand Oaks based Legendary Organics to open the first such dispensary located in an industrial park.

When, oh when, will our City Council get on board with this and leave the money here? We are losing many many dollars.

∙Sorry to say that Ralphs on Victoria has removed the multi newspaper rack so you can’t pick up the Breeze at that location but there are still over 500 places that you can. So enjoy

∙On the final day of California’s legislative session, the state’s newspaper industry won a temporary reprieve in a fight regarding payment for carriers.

The Assembly voted 62-4 to send AB170 to the governor’s desk. AB170 gives publishers a one-year extension to comply with a new landmark labor measure, AB5, that would reclassify many workers now considered independent contractors, including newspaper delivery people as employees.

Temporary work or temporary employment (also called odd jobs or gigs) refers to an employment situation where the working arrangement is limited to a certain period of time based on the needs of the employing organization. Temporary employees are sometimes called “contractual”, “seasonal”, “interim”, “casual staff”, “outsourcing”, “freelance”; or the word may be shortened to “temps”.

This new gig law is opposed by many who feel that its purpose is to get more employees to become dues paying union members. There are many independent contractors don’t feel exploited by their employers. The law is also so interpretive, and unclear that it could be years and end up in the courts for clarification before being implemented. Many small businesses are really going to struggle with this and could go out of business.

∙ “Wow! Yet another big storm heading to Puerto Rico. Will it ever end? Congress approved 92 Billion Dollars for Puerto Rico last year, an all-time record of its kind for “anywhere” stated Trump.

As he has frequently, Trump dramatically overstated how much money Congress has allocated for recovery because of Hurricane Maria in 2017. Congress had allocated $42.7 billion, with less than $14 billion reaching the island. This large figure cited by Trump is an estimate of potential storm-related liabilities over the next 20 years (but he is close for him).

∙It is about time that America’s gun debate is finally happening at the corporate level. Something needs to be done. The chief executives of 145 companies have sent a letter to the US Senate seeking expanded background checks and “red flag” laws which would let courts remove guns from people who might threaten themselves or others. Amazing how many guns that are purchased for security are used to kill a family member(s) or for suicide.