On Monday, August 7, 1978, Sergeant Darlon “Dee” Dowell became the only Ventura Police Officer killed in the line of duty. 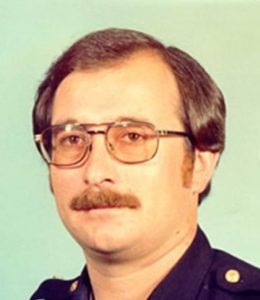 On August 6, four men tried to rob a businessman making a night deposit at the Bank of America on Victoria Avenue. The robbery was interrupted, and the four suspects fled; two were apprehended immediately but two men, 20 and 22-years-old, escaped.

The next day a team of seven Ventura police officers served arrest and search warrants on the two outstanding suspects. Sergeant Dowell, Detective Don Bales, Detective Carl Handy, and Officer Gary McCaskill approached the front door of the suspects’ house on Olive while Sergeant Art “A. J.” Farrar, Detective John Leach, and Officer Don Arth set up a perimeter around the residence. Officers entered the home and were detaining a suspect in the living room when a 22-year-old man fired a shotgun from a darkened hallway, fatally wounding Sergeant Dowell. The shooter then ran through the house, crashed through a rear window, and was shot and killed by pursuing officers.

At the time of his death, Sergeant Dowell, 32, was a nine-year veteran of the Ventura Police Department. He is remembered as a dedicated police officer, devoted husband, and loving father to his two young children.

The City of San Buenaventura named Dowell Drive, the location of police headquarters, in Sergeant Dowell’s honor in 1979. 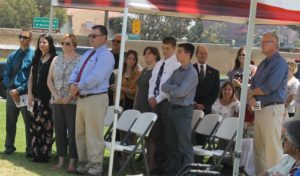 A scholarship set up in honor of Sergeant Dowell by the Ventura Police Officers Association has awarded over $100,000 to local students.

Former Ventura Chief of Police and current Councilmember Mike Tracy told the large gathering “today we take time to remember Ventura police sergeant Darlon Dowell. Dee was my first sergeant afterI graduated from the academy. He was a new sergeant, loved being a cop and was truly dedicated to the Ventura Police Department. He was good to work with and for—respected for his work ethic and sense of fairness. “

“When I walk into city hall I always glance at the photo of Dee that hangs on the wall near the human resources department—a tribute to his service and sacrifice. And every time I’m reminded how young he was—32. He had his whole life and career in front of him.”

“For his wife Miki and their family the tragedy of august 7, 1978, changed their lives forever. That day also significantly impacted those who were with Sergeant Dowell, and all who worked to investigate the crime and deal with the aftermath.”

“I believe Dee would want us to take this moment to honor and respect the men and women of the VPD who today serve this community just as he did—out of a sincere desire to make a difference in the lives of other people.”

“So today we remember Dee Dowell—a husband, father, friend and fellow police officer—and remind all who serve and protect to be vigilant, safe, and prepared. “

It’s the line between order and anarchy, normalcy and horror, life and death, that street cops cruise every day. Each time you enter a strange house or approach a suspicious vehicle or walk up to a potential suspect, you risk crossing over into a place where no one is paid enough to be.