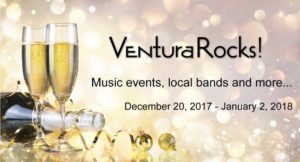 I’m not going to lie, this is awkward. How does one write about promoting a music scene while so many around us are suffering major loses? We’re suppose to be celebrating the most joyous time of the year and we find ourselves affected by one of the worst disasters our City has ever had to endure. I’m a firm believer that music helps to heal, and thankfully we have a community of artists, venues and music supporters who have been rallying to help others. That is what I plan to take from this catastrophic event. The fundraisers, the donations of one’s tip jar, bands playing for free, venues offering their facilities, and the dozens and dozens in our community planning, creating, and supporting all these efforts. Yes, Ventura does and will continue to rock.

Here now, as promised, New Year’s Eve parties around town. Please contact the venues for ticket pricing and amenities and be sure the event has not sold out. Grapes and Hops will be hosting a Speakeasy themed party with the Barrelhouse Wailers; Discovery has Hirie in the house; The Tavern offers a dress-up black and white themed event with DJ Aycer; the Hong Kong Inn has the Misunderstood band; the Star Lounge snagged Alastair Greene for their party; The Greek at the Harbor has an “Under the Sea” themed soiree with the band Awesome Sauce; Café Fiore has Young Dempsey up front and Big Adventure in the Tree House; you can party at the Copa Cubana with the Brandon Ragan Project; you’ll find What the Funk at Gigi’s; Crosscut will be at the Keynote Lounge; the House Arrest band will be at the Moose Lodge; and there’ll be plenty of dancing with DJs at Bombay’s and Sans Souci.

And I just got the press release that Night Demon has announced Frost and Fire has gone global with their next event to be held in London over two days, May 11 and 12, 2018. Headlining will be Cirth Ungol. Way to go boys.

I’m wishing a safe, prosperous and harmonious year for one and all.