•  I know that I have written a little about this but actually making the decision that Scamp’s life no longer had any meaning to him was one of the most difficult and agonizing decisions (and writing this) that I have ever had to make. Fortunately, I didn’t need to make it alone.

We basically kept Scamp alive for several weeks by spoon feeding him, but he was drinking water, still walking around and still smiling at us which is what kept us continuing his life. Was it for his sake or ours, I hope his.

But, on April 28th we decided that he is time was up. Called the vet (Ventura Veterinary Hospital) and took him in on Saturday.  I went in while Diane stayed in the car with Scamp. A young lady that works there came out to speak to Diane who started to cry and then the young lady started to cry.  I asked her do you cry every time and she said “yes”.

I did feel comfort right then in knowing that they would be so caring towards him.

We took him into the examining room and were given a few choices to make.  The first one was do we want to be with him when they put him to sleep.  They explained that he would be given an IV and then the fatal shot.  We decided to say goodbye in the exam room knowing that he would have several compassionate ladies with him petting him and saying goodbye. And our last thoughts of him wanted to be of him still looking at us with his cow eyes.

The other decision was did we want him to be cremated individually so that we could have only his ashes or cremated with 400 other animals.  We decided that (need to stop for a moment because I’m crying) he would like to be with other animals, so we made that decision.

While lying on the exam table unable to get up, he suddenly stood, stared (taking another pause) at Diane then stared at me and laid back down to never get up again. I’d like to think that he was saying goodbye. 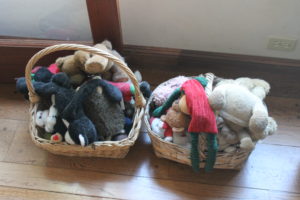 It is now been nine days and our large house still feels empty without this 20 pound hairy (he had hair and not fur) little guy.  I still look at the bed with our cat, Savana, in it and then look for Scamp who isn’t there.  Or, I’ll look down at the floor while eating and he isn’t there either. I’m sure that will eventually stop to some degree.

I, again, want to thank all of you for your kind words, emails, prayers and cards. They have really helped make it easier for us.

The next question, is, of course, is we will be getting another dog?  That decision will be 100% up to Diane because she is the one that takes care of our pets.  I’m like a grandpa and hand them to her when they need their diapers changed, bathes (or fleas removed).

•  The Ventura County Star has announced that the Los Angeles Times will soon start printing the VC Star beginning with the July 12 edition. The Star will be closing their printing facility.

The Star stated, “The cost-cutting move comes as The Star, like newspapers across the country, continues to grapple with declining advertising revenue.”

Well – we must be doing something right as this issue contains our largest number of ads to date. I want to thank our readers, advertisers and especially our great account rep, Breezy Gledhill, for making that possible. And, of course all of the other people who continuously work hard on each issue.

The funny thing is that the Star gave us a printing quote a few years ago. Just imagine if we had accepted – the headline would have been,  “The LA Times’ stock jumped 11% since it was announced that they would be printing the Ventura Breeze.”

•  In our last issue we had an article about the planting of a new tree at Two Trees (funny why that is capitalized). We have had some emails and a call disputing some of the facts of just how many trees are up there and when they were planted and cut down. Were there 5 in ???? and 2 in???? and 15 in ????. So, maybe some of the numbers were wrong but is it at all important? The important thing is the new tree replaces the dead one and we got that right!

•  I have had four shows on my new radio show (on KPPQ-LP 104.1FM). The show airs Mondays, Wednesdays and Saturdays at 10am and a bunch of other times during the week that I don’t know about. Try to listen (low wattage so not always easy to pick up) and give me your feedback (good and bad) and suggestions for future guests. I haven’t aired a new show because I have had a viral cough for several weeks which makes it tough to host a radio show. And the meds wiped me out, but made me happy. You can listen to the shows at www.venturabreeze.com “Face Of Ventura”.

•  In his first 100 days in office, the Trump’s have spent $30 million on traveling expenses. It’s nice to know that they now have funds available to start taking some vacations.