•  I want to congratulate the new members of the Measure O Citizens Oversight Committee. With the passage of Measure O last November an oversight committee was required to review the new revenues and to recommend expenditures for the new funds. Ventura’s half-cent sales tax oversight board received close to 70 applications for seven spots. The tax is expected to generate close to $11 million in 2017-18 and will last 25 years.

In a previous issue, we erroneously stated that the members would serve 3 and 4 year terms. They have a very important job so I hope that they do it well. Their first presentation to the City Council will probably be on May 10. Should be very interesting.

•  Deciding when Scamp’s time will be up has been one of the hardest decisions that I have ever had to make (so I will let Diane make it). We are not even sure if spoon feeding him to keep him alive is the right thing to do. He is still drinking water on his own and moving around the house and smiling at us. Just not sure if we are keeping him going for his sake or ours? 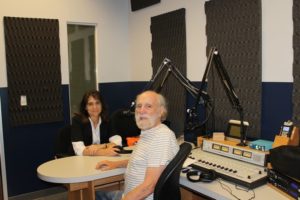 •  The latest guest on my new radio show on KPPQ-LP 104.1FM was Elena Brokaw – the Interim Executive Director for the Museum of Ventura County. The show airs Mondays, Wednesdays and Saturdays at 10am. Try to listen (low wattage so not always easy to pick up) and give me your feedback (good and bad) and suggestions for future guests.

•  In this issue our Person to Person question is “What is your favorite season in Ventura?” Interesting that no one specifically said summer which would shock mid-westerners. A compliment to us that all of our seasons are wonderful.

•  I know that I shouldn’t make too many comments about our president, but like late night comedians it is impossible not to. When running he kept telling us that he never would settle a law suit (real men don’t do that). He just paid a $25 million settlement in the Trump University litigation. Maybe he doesn’t consider a measly $25 million a settlement.

•  Three very important people make the Ventura Breeze happen me, Alfred J. Lewis and Breezy Gledhill are left-handed. There have been some (and are) other lesser known lefties like Alexander The Great, Julius Caesar, Leonardo Da Vinci, Isaac Newton, Napoleon Bonaparte, Beethoven, Charlie

Chaplin, Babe Ruth, Bill Gates and 6 out of the last 8 US presidents – to name just a few. About 10% of the population are lefties. No wonder the Ventura Breeze is so amazing.

But being left-handed has not always been easy. Even today I read a report that a school teacher in Oklahoma sent a 4-year old left-handed boy home with a note from the teacher that left-handedness is associated with evil and the devil.

In fact the word left derived from the Old English word “lyft” which means weak and useless.

In the old days when people used ink pens our hands went right over the writing and smudged the ink. That is why some older people write with the hand kind of upside down so that the hand is in back of the ink. Of course lefty kids today don’t have that problem because they do as all of their writing on computers, tablets and phones.

But now at least you know that if the Breeze does something wrong that the devil made us do it.

•  Say it isn’t so – my world just got turned upside down. The writers of “reality” TV shows walked off the job recently in an attempt to unionize more unscripted shows. Will I find out next that the Easter Bunny really has nothing to do with Easter?

•  Between Donald Trump and Mexican drug cartels there is a war on journalists and journalism. Trump has called journalist “enemies of the people.” That’s one of the nicer things he has called us. Anything that he doesn’t agree with is “fake news”( I know I said I wouldn’t comment too much on him , but I just can’t help myself).

In Mexico, so many journalists have been killed for writing articles exposing the drug cartels that several newspapers have closed down.

Of course no news organization is perfect (liberal or conservative) but an independent press is vital in all democracies and guaranteed by our constitution.

•  Jackie Moran, who was elected to the Ventura Unified School District board last year, has been found not guilty of truancy by allowing her son to be routinely absent from Cabrillo Middle School.

Moran had been charged in February with allowing her son to be routinely truant.

She told Judge Michele Castillo that her son had to miss school because of an ongoing medical condition (without doctor’s proof). The judge felt that Deputy District Attorney Brandon Ross did not prove his case beyond a reasonable doubt.

I’m not taking sides but to waste the time of a judge, district attorney, etc. for what could have been a $100 fine is ludicrous. Certainly the school and the Moran’s should have been able to work this out without going to court.