The Pooch Parade is C.A.R.L.’s largest fundraiser of the year, and a major touchstone for the local rescue community. The day begins with a charity walk that leads into a large festival celebrating pets. Dozens of animal rescues, non-profits, and vendors are expected to exhibit at the beachside event.

The fundraiser is greatly expanded for its 20th consecutive year. C.A.R.L. has moved the Pet Expo to Shoreline Drive, adjacent to Surfer’s Point , the Expo has been restructured with a focus on broadening its appeal.

“The Pooch Parade is about raising funds, but it’s also about raising awareness for the plight of rescue animals,” commented C.A.R.L. President Mary Saputo.

Beer and wine will be served at the Expo for the first time, and contests, games, and activities are planned for kids.

The Pooch Parade is on May 7. To learn more about the event, register for the charity walk, or register as an exhibitor, visit http://poochparade.org.

Canine Adoption and Rescue League (C.A.R.L.) is a 501c3 registered non-profit, no-kill, all-breed dog rescue and sanctuary. Since 1996, C.A.R.L. has rescued and placed thousands of unwanted, sick, abandoned, and homeless dogs. Dogs in the adoption program are placed in pre-screened, loving and secure homes.

•   This brought a smile to my face for sure. February 28th was the greatest day ever for inmates and their new best friends. A day that had been in the works for nearly two years! The day Pivot brought their first dogs into Todd Road Jail. Rusty, Brando, Lipit, and Chance all arrived and were met by the Ventura County Sheriff Office officers and others. The team of employees at VCSO & Todd Road Jail Facility have embraced Pivot’s canine educational outreach program.

The day was amazing from the moment the dogs were removed from the transport van and escorted to the lush green grass of the newly installed play yard. They were introduced to the staff, posed for a few pictures and then were greeted by their inmate friends. The morning was filled with smiles and tears of joy.

It takes courage to believe in second chances. Pivot’s program is designed for second chances, a win-win for both humans and “last chance” dogs.

Pivot’s  mission is to encourage Individuals to find their voice through innovative animal literacy based programs that are designed to develop personal and vocational skills by becoming responsible, productive members of the community. Each individual student learns patience, compassion and responsibility by caring for, training, and finding forever homes for last chance shelter animals. 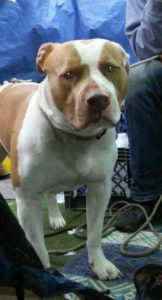 Ruckus, 3 years old, died tragically on Harbor Boulevard when he ran into the street.
Beloved by many, missed by many.