•  Behind City Hall is a property referred to as 505 Poli St. It has housed a variety of uses since it was acquired by the City in 2006 from the County for $3.64 million. The purchase included the significant adjacent parking and the 9.95 acres that is currently leased to the Ventura Botanical Gardens.

In 2009 the 3rd floor was converted into a business incubator for technology entrepreneurs with many successes. The 4th floor was used to subsidize office space to help non-profit organizations that had to move when Brooks Institute took over the two upper floors.

The City has never developed a long range plan for the building or the adjacent Crime Lab, though this is now being conceived. The need for a plan became even more apparent when Brooks Institute closed-up leaving the construction on the 4th and 5th floors un-completed and still empty.

A detailed financial analysis has not been completed yet which includes fire, seismic and basic commercial upgrades such as HVAC, elevator, plumbing and electrical systems. The City Council has asked staff to complete a plan for evaluation.

At a recent City Council meeting a number of possible options for the space were presented by staff.

Option 1: Sell the property
(505 building and/or the Crime Lab).
The Council rejected this.

Option 2: Demolish the Crime Lab.
The Council rejected this.

Option 3: Keep the property.
This was approved by the Council. The Council will now need to determine what to do with the property.

I completely agree with the decision to retain the property and look forward to learning about the staff reports and further action by the Council. Hopefully, the final use will include space for non-profits, and an incubator for business start-ups.

I hope that if they have market value space to rent that they hire a professional leasing company to handle this so that we don’t end up with another Brook’s debacle.

•  The Ventura City Council has approved by a vote of 5-0, with two councilmembers absent, a new “park exclusionary ordinance“ that they hope will reduce the amount of people who break laws at city locations. It will make it easier for police to temporarily ban dangerous or illegal activity from parks, the promenade and other city owned properties. Issues include urinating and/or defecating in public, using or selling drugs, vandalism, fighting or having an aggressive dog.

Depending on the number of offenses, and the nature of the act, people can be banned for a day or up to a year. Those given an exclusionary order would have up to five days to appeal to the City Manager’s office.

The VPD requested this ordinance be in place for about 3 years, but there was concerns about its legality. City Attorney Gregory Diaz said the ordinance could withstand a legal challenge because of the appeals process put in place.

I agree that there are some serious problems at these locations and hope that it doesn’t unfairly criminalize the homeless but only those who are breaking the law.

•  Here I go again: Researchers at UCLA reported that electronic cigarettes may increase the risk of heart disease.

They found that two risk factors for heart disease were elevated in 16 e-cigarette users compared with 18 nonsmokers.

“The pattern was spot-on” for what has been seen in heart attack patients and those with heart disease and diabetes, says cardiologist Holly Middlekauff, a co-author of the study.

E-cigarette users in the study had heartbeat patterns that indicated high levels of adrenaline — also known as epinephrine —which is a sign of heart disease risk.  Researchers also found signs of increased oxidative stress, an imbalance of certain protective molecules that can cause the hardening and narrowing of arteries.

•  The VC Star (that some of you old-timers still call the Star Free Press)keeps getting smaller (no more section B, etc.), and it has less local coverage. I really hate to see newspapers struggling so much. Hopefully, the Breeze’s advertisers (and readers) will always be here to support us.

•  Recently, I went to listen to the Ventura County Concert Band play at Ventura High. They were wonderful – it’s unfortunate that we don’t have a performing arts center here in the city where they could have played.

•  The VPD is presenting is a public education program titled Mental Health First Aid that can help individuals across the community understand mental illnesses. Read more about it in this issue it is very important.

•  Chang Liampetchakul, the owner of Tipps Thai Cuisine located downtown, recently suffered a stroke. He was cooking up some ribs for Super Bowl, when some friends came to pick him up. When they arrived he crawled to the front door to unlock it. Doctors think he’s going to make a good recovery, but it will take time. I certainly wish him well and a quick recovery. A GoFundMe account has been set-up for those wishing to help raise funds. https://www.gofundme.com/chang-chang-chang

•  Please see the ad below for the Ventura Breeze presenting the Equinox Ensemble at the Squashed Grapes and come join in on the fun. I will be there at 5:30. 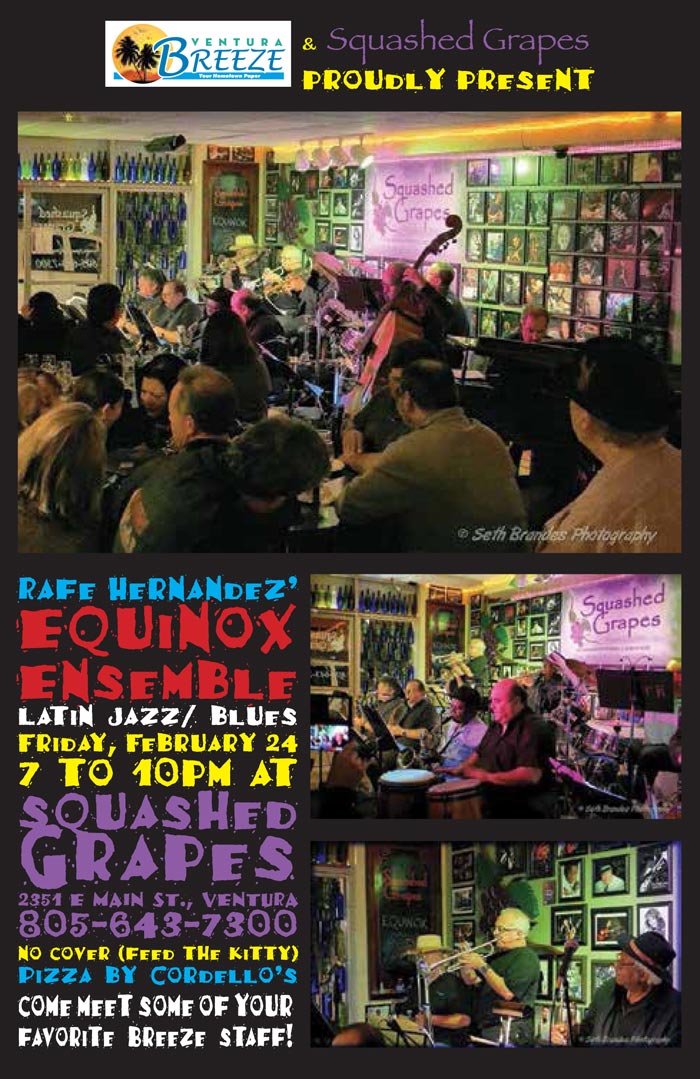