On November 19, at 10:00am, the Ventura Police Department Command Center received a call of a subject making threats towards employees and refusing to leave the Vons store, 2764 E. Thompson Blvd.  Officers responded and contacted the suspect, later identified as 48 year old Ventura resident Angel Vales inside the store.

When Vales was contacted, he immediately became confrontational and threatening towards the officers.  At one point, Vales attempted to leave and one of the officers grabbed him by the arm.  Vales pushed that officer in the chest and a struggled ensued.  A second officer immediately grabbed Vales and both officers took him to the ground.  Vales attempted to hit the second officer as well.  Once on the ground, Vales was taken into custody without further incident.

On November 23, at approximately 2:30am, a Ventura Police patrol officer attempted an enforcement stop on a vehicle being driven by the suspect, later identified as 27 year old Ventura resident Anthony Mosqueda on Darling Road east of Petit Avenue.  Mosqueda failed to yield to the officer and accelerated away at a high rate of speed.

The officer pursued Mosqueda as he continued east on Darling Road before turning southbound Burlington Avenue.   Mosqueda continued to evade officers’ through the residential area for several miles.   Mosqueda exited the vehicle as he turned onto Medford Street and attempted to flee on foot.   Officers located Mosqueda a short distance from his vehicle and took him into custody without incident.

Mosqueda was placed under arrest and transported to the Ventura County Jail where he was booked for felony evading and resisting arrest. Mosqueda is a PROS offender and is on probation for gang crimes and possession of a stolen vehicle. 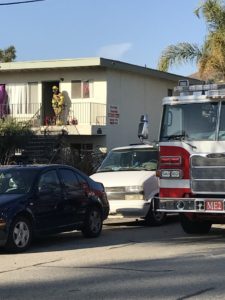 On November 25, just after 2 pm, a large explosion was heard from the second floor of a large apartment complex on Hearst Ave in the Ventura Midtown. Police and Fire immediately responded and found smoke coming from a single unit. Firefighters entered the building and located the main body of the fire in the kitchen area. Fire crews knocked down the fire in 3 minutes and crews searched for extension in the one bedroom unit, while ensuring the attached units were not compromised.

A total of four people were inside the unit of the time of the explosion. All four were able to exit the apartment with one complaining of difficulty breathing and was assessed by fire paramedics. The blast was due to the ignition of butane that occurred during a highly dangerous process of making hash oil from marijuana.

Ventura Police investigated the scene, controlled access, interviewed witnesses and provided traffic control. A special investigation unit was dispatched to the scene. Further information in regard police actions will be forthcoming.

The unit was deemed a crime scene by the Police Department and the Fire Department yellow tagged the single occupancy limiting habitation of the unit. All adjacent units were deemed to be without damage. Ventura’s Building and Safety Department will examine the structure to ensure the safety of unit and will lift the limited occupancy restriction at that time. The scene is still under investigation with the Ventura Police Department. Total damage to the building and contents is estimated to be under $10,000.

On November 25, at approximately 6:30pm, the Ventura Police Department Command Center received a call from a victim of an assault that had just occurred on the pier.

The victim advised that he had been struck in the face by the suspect who had attempted to rob him of his cell phone. The suspect fled the area on foot but was detained in the area of the Harbor parking structure by responding officers.

The suspect, identified as 42 year old Ventura vagrant Jesse White, had recently been released on parole after serving a lengthy prison sentence that stemmed from his conviction of an assault on a peace officer arrest in 2003. White was also found to be under the influence of a controlled substance.

The victim was treated at the scene for facial injuries that did not require hospitalization.

White was arrested and transported to the Ventura County Main Jail where was booked on the felony charges of attempted robbery and a parole violation as well as misdemeanor charges of battery and being under the influence.

Possession of a Stolen Firearm Arrest

On November 25, at 12:30am, a VPD K9 officer observed a vehicle near the intersection of Telegraph Rd and Wells Rd with expired registration tabs displayed.

The officer conducted a traffic enforcement stop on this vehicle and contacted the driver, identified as 21 year old Ventura resident Eduardo Ramirez, and explained the reason for the stop.

As the officer spoke with Ramirez at the driver’s window he observed a handgun in the rear passenger seat area. The officer requested back-up and detained Ramirez until additional VPD patrol officers arrived and assisted in removing Ramirez from the vehicle.

The handgun was recovered and found to be loaded. The investigation determined that this handgun had been stolen in a residential burglary that had occurred in 2010.

Ramirez was arrested for being in possession of stolen property, possession of a loaded firearm in a vehicle, and possession of a firearm with its serial number partially obliterated. He was transported to the Ventura County Main Jail where he was booked on the felony charges.