Over the last several weeks the Ventura Police Department’s Street Crimes Unit has been conducting an investigation into the sale of narcotics on the 1400 block of Mead Ave. in the city of Ventura.  On November 10, at approximately 8:30am, detectives served a search warrant at the involved residence.

Assault With a Deadly Weapon Arrest

On November 12, at approximately 11pm, VPD patrol officers responded to a residence in the 300 block of E Main St re: a report of a disturbance involving a male and female.

Officers arrived and contacted the victim who said he was visiting a female acquaintance and that during an argument she had stabbed him with a knife.

The officers confirmed that the victim had sustained injuries to his torso and head and requested medical personnel to respond.

Officers then contacted the female suspect, identified as 59 year old Ventura resident Susan Martinez, inside the residence and took her into custody without incident.

The victim was transported by ambulance to the Ventura County Medical center for treatment of non-life threatening injuries.

Martinez was arrested for assault with a deadly weapon, a felony, and later booked into the Ventura County Main Jail.

This investigation is ongoing. Anyone with information related to this crime is urged to call the Ventura Police Department Major Crimes Unit at 339-4488, or make an anonymous call to Crime Stoppers at 1-800-222-8477. If your information leads to an arrest, you could receive a cash reward of up to $1,000.

Over the last several weeks there has been a series of residential burglaries in the area north of Telegraph Rd. and east of Victoria Ave.  During the course of the investigation, Street Crimes Detectives identified 43 year old Ventura resident Shannon Salas and 42 year old Ventura resident Joseph Grizzaffi as potential suspects.  Salas and Grizzaffi were arrested in an unrelated burglary in Santa Barbara County, and during the arrest additional evidence linking the two of them to the Ventura burglaries was recovered.

On November 16, at 12:30pm, Detectives obtained arrest warrants for Salas and Grizzaffi.  Salas was later located on the 6600 block of Telephone Rd. and taken into custody.  Salas was booked into the Ventura County Jail.  A search of his residence yielded additional stolen property and narcotics.  Also contacted in the residence was 24 year old Simi Valley resident Cristopher Delapp, and he was booked for an outstanding felony warrant and possession of narcotics for the purpose of sales.  Grizzaffi is still in custody in Santa Barbara County Jail.

On November 17, at approximately 2pm, a VPD patrol officer observed a vehicle make an unsafe lane change in the 1100 block of Johnson Dr. The officer conducted a traffic stop and was informed by the dispatch center that the license plate on this vehicle did not match the make and model and was listed as a stolen plate.

Additional VPD patrol officers responded to assist and a high risk stop was initiated since the vehicle had three occupants and the circumstances surrounding why a stolen license plate was attached were not known.

Once the occupants were removed from the vehicle the investigating officers determined that the driver, 30 year old Camarillo resident Danielle Giovanello, was the owner of the vehicle and had intentionally switched the rear plate with one from someone else’s vehicle in an attempt to conceal the fact that her vehicle’s registration had expired several months ago. Giovanello was also driving on a suspended driver’s license.

On November 18, at approximately 11:30am, officers responded to a residential burglary where the victim was getting marijuana stolen from his home.  The victim had video surveillance cameras and identified one of his neighbors as the suspect.  On two separate occasions the suspect is seen jumping the victim’s fence and going into his garage.  During both incidences the victim’s medicinal marijuana was stolen.

Officers contacted the suspect and identified him as 25 year old Jonathan Ward.  Ward admitted to taking 5 grams of marijuana during the burglaries.  Ward was arrested and booked at Ventura County Jail for Burglary. 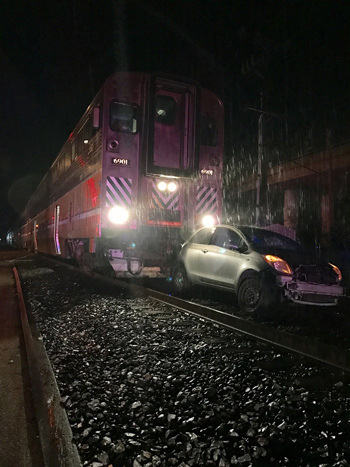 On November 20, at approximately 7:30pm, the Ventura Police Command Center was notified by Union Pacific Railroad dispatch regarding a vehicle being struck by an Amtrak train on the railroad tracks near Garden St. and the Ventura County Fair Grounds.  Officers and Ventura City Fire personnel arrived on scene and found an unoccupied compact vehicle wedged underneath the front of the train.  The driver of the vehicle, later identified as 27 year old Ventura resident Arcelia Delgadillo, and a male passenger were standing nearby and found to be uninjured.

According to the train conductor the southbound train was approaching the Amtrak Station and was travelling at approximately 15-20 mph, when the vehicle was spotted on the tracks.  All emergency attempts were made to stop the train, but the train did not stop in time and struck the vehicle.

It was determined Delgadillo was intoxicated and unintentionally drove onto the railroad tracks, causing her vehicle to become high centered on the tracks.  She and the male passenger had exited the vehicle approximately 3 minutes before the collision with the train.  When the train struck the vehicle, it possibly caused an electrical shortage which electrified the vehicle and railroad tracks. Due to the rain, this caused an extreme hazard to emergency personnel.

Ventura City Fire personnel remained on scene and monitored the removal of the vehicle from the railroad tracks.  The train was delayed at the scene for approximately two hours while the investigation was being completed.

At the conclusion of the investigation, Delgadillo was arrested and booked into the Ventura County Jail for driving under the influence of alcohol.

None of the 60 passengers on the train were injured.