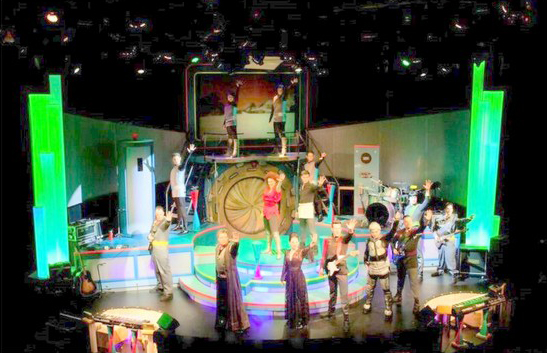 In a decidedly out-of-this-world variation to their usual fare of dramas, comedies and introspective works, the Rubicon Theatre has brought together a stellar cast to take the audience on an unforgettable journey through time and space.

From the moment one enters the theater, the scene is set. Blue-haired, pointy-eared members of the Starship Rubicon flight crew welcome everyone aboard. The stage is buzzing with beeping equipment and lights. The audience is ready to blast off into space with Return to the Forbidden Planet, a high-quality send-up mixing Shakespeare’s The Tempest and other works with classic rock and roll music and a generous helping of stereotypical science fiction.

Played with conviction and a dash of irony, the crew of the SS Rubicon delivers slightly altered versions of the Bard’s words, once again proving the timeless omniscience of his writings.  The themes of love, madness and the desire for power know no planetary boundaries.

Pounding out a galaxy of familiar foot-tapping tunes from the 1950’s and 1960’s, many of the actors’ double as the musicians, staying perfectly in character as they rock out. You won’t want to miss Rubicon co-founder, Artistic Director Emeritus and star of the recent drama Darrow, James O’Neil, belting out “Don’t Let Me Be Misunderstood” as he gives life to the villainous Dr. Prospero.

Directed and choreographed to perfection by Kirby Ward, each member of the starship’s crew embodies their chosen character with gusto. Many have adopted characteristics of familiar sci-fi characters from television and film just enough to be reminiscent.

The star-studded cast includes Jason Graae as the robot Ariel, Caleb Horst as the ingénue Cookie, Harley Jay as Captain Tempest, Craig McEldowney as Bosun and Martin Landry as the Navigation Officer. Rebecca Ann Johnson as Gloria, the Science Officer, and Kimberly Hessler as Dr. Prospero’s daughter Miranda, lend the female vocal power to the mix.

Music Director Trevor Wheetman on synthesizer, Omar D. Brancato on bass, and Matt Tucci on drums are occasionally accompanied by Jay on electric guitar, Graae on clarinet and others. Although the live music sometimes drowned out the lyrics, the familiarity of the songs made that a forgivable and minor faux pas.   The four flight crew members perform multiple-duty as back-up singers and dancers, adding additional dimension to the festivities.

Return to the Forbidden Planet is pure toe-tapping fun, especially for those of us who grew up jiving to the tunes of Eric Burdon, James Brown, The Beach Boys and Roy Orbison while tuning in to Lost in Space, Star Trek and Twilight Zone.  Bend time and space with an evening of hilarity, fun and poetry. Catch this one quickly before it leaves Ventura’s orbit.