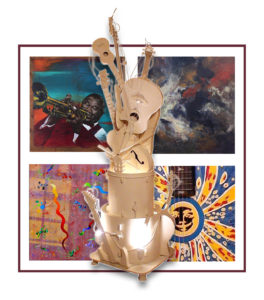 Music and the Arts
by Pam Baumgardner
VenturaRocks.com

Very Ventura is one of the coolest stores in town featuring local vendors. It’s also where you’ll find the Ventura Rocks Music Listening Station which offers recorded music from local musicians.  They have a gorgeous gallery towards the back of the store called Gallery V which will host a new exhibit called “Good Vibrations: A Harmony of Art & Music” on June 18th which will run through July 24.  Xavier Montes will perform at the opening reception.  I’m especially looking forward to seeing the works from one of my favorite rock photographers, Cliff Montgomery; you might have seen his work up at Bombay’s.

Surf Brewery will be celebrating their 5th anniversary with a party in the parking lot all day long featuring live music including Raging Arb and the Redheads, The Slider, Tom Loughman Band and more.  Make your plans to join in the fun on Saturday, June 18; the music runs 2-7 pm.  They’ll have several specials and are hoping to raise funds for the Notes for Notes program at the Boys and Girls Club of Greater Ventura.

Reggae returns to the Tree House at Café Fiore on Sundays now through Labor Day.  Catch bands like the Babylon Rockers, Jahmark & the Soulshakers, and Casey Jones & the Reggae Train. Music kicks off at 6 pm.

Watermark has extended their live music to include Thursday evenings 7-9 pm with more of an easy listening vibe including artists such as Karen Eden, Coso, Jade Hendrix and others.

The Ventura premiere of the Rachel Flowers documentary by Lorenzo DeStefano entitled, “Hearing is Believing” will be shown at the Century Theater on June 9; Rachel will be performing at Squashed Grapes on Saturday, June 18.

And speaking of locally produced documentaries, I caught Rain Perry’s new film, “The Shopkeeper”; it’s an amazing piece of work which gives a better understanding of the struggles musicians face. It’s evolves around the life of music producer Mark Hallman, but covers the more important aspect of the evolving music industry and asks the question, “Everybody can make a record, but nobody can make a living. Is there a problem with that?”  The film is an excellent platform for starting that dialogue not only with musicians, but with music lovers and our responsibility when it comes to supporting artists. The film will be available eventually on iTunes and Hulu. You can find a Q&A with Rain Perry at VenturaRocks.com.

And finally, by the time we go to press the next episode of Ventura Rocks at CAPS Media featuring Shaky Feelin’ should be up and available on the Ventura Rocks and CAPS Media You Tube channels. The band was super fun to work with and I think an excellent representation of what Ventura’s music scene is all about.

Do you have any music related news or upcoming shows you want help publicizing? Send all information short or long to Pam@VenturaRocks.com, and for updated music listings daily, go to www.VenturaRocks.com.