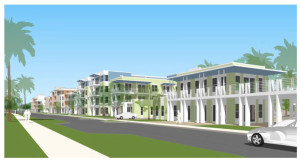 This is a very early design rendering of the proposed apartment units to be built on the “Triangle” lot mentioned in our last issue.

• We have an opinion piece in this issue from Lynne Hiller that, in part, states “Ventura needs to grow its tax base, and building higher-level or luxury homes adds people who pay higher taxes and spend more money. This helps underwrite all of Ventura’s services to lower income people as well as supporting restaurants and stores, and neither of these projects, nor any of the ones cited at the beginning of this letter, take farmland out of production.”

“The City of Ventura needs to move forward on some of these projects.  I understand that water use will be an issue, but the technology exists to make new construction much more water and power efficient than the old homes, and either a city moves forward or it moves backward – it doesn’t and can’t stay the same.”

I included her quote because I completely agree with her.

A city certainly needs a diverse population, and we also need “rich” and even “very rich” residents to bring companies here so that low and moderate income workers have jobs in Ventura. That is why we need “executive housing”. Many of our residents need to leave Ventura each day to work because there are not enough jobs here.

In defending the concept that Ventura already has executive housing, I once heard one of our City Council Members state that “we have lots of million dollars homes here” suggesting that these represent executive housing, which they do not.

Of course we have million dollar houses – we are a beach community with homes on the ocean or views of it which is why they are worth a lot of money. Executive homes are large, sit on several acres of land and typically worth $10,000,000 and up. They don’t have 5 foot side yards and 20 foot front yards.

I’ve heard folks say what makes Ventura unique, and a great place to live, is that we have jobs for low and moderate income wage earners. I live here because of the usually great weather, the arts and our laid back style, as do most people. Not because we have housing for low and moderate income workers (which by the way are always consistently being built ). It is wonderful that these folks can live here as well, but we need the full spectrum of the population.

There is a group of people here that just doesn’t want any changes made that seem to have a “we don’t want no rich people here” mentality.

Without new money coming into Ventura we will continue to have a stagnant tax base, and people will complain about a corroding infrastructure. This erosion will continue unless we can entice new, larger companies to relocate, or open branches, here.

In fact, several companies recently left Ventura and moved their employees to their new locations.

• Which brings me to the proposed 55-unit Regency project that would be located on our hillside. It’s many years away but already has an organized group opposed to it.

I asked a neighbor with an opposition sign on their front lawn some questions about the project.

Have you seen the property?

Have you seen the proposed drawings?

Have you read the geology report?

So you are against a project that you have no knowledge of?

“Yes, because the LA developer doesn’t want to follow our HMP. I don’t know what the HMP is but he should follow it.”

This represents another group of Venturan’s who don’t want any change, so they oppose everything without really knowing enough to thoughtfully determine if it is good or bad for Ventura.

Future Ventura Breeze issues will include more facts regarding this project, so that readers can make  more informed decisions about the positive and negative effects of the project.

I certainly haven’t decided for or against it at this point. To be honest, I might be prejudiced in favor of it because of the new people/money it will bring to the city. Plus, the developer would be gifting more than 700 acres of the site to the Hillside Conservancy. I have been to the proposed property and it would be a wonderful addition to our being able to access and enjoy the hillsides. Fifteen minutes into this property and you are in a different world.

The former Sams Rv Club building, located at the end of Vista Del Mar, is being remodeled and will be the future home of the Ventura County Credit Union.

Two downtown restaurants have closed for different reasons The owners of 71 Palm have called it quits after 20 years and will be closing this week. Just time to move on they said. Sorry to see them go.

And, after only 8-months, Padrino’s Ristorante (on Santa Clara) closed because they just couldn’t make it – not much of a surprise, really. Another Italian restaurant is waiting for approvals to move in.

• The Ventura Unified School District will be looking at ways to provide temporary cooling to many of its class rooms. Probably too late for this crazy heat wave (and humidity) but it will certainly be needed if current conditions represent our new weather pattern.

Foster Library had to close for several few days because of the heat.