• As detailed in a recent issue of the Breeze, there has been great controversy over the potential opening of a strip club on Market St. Even though millions (it seemed like) of citizens showed up at a City Council meeting in opposition to the club, they could not stop it from opening because it is an allowed use at the proposed location. The City Council reversed its staff recommendation to not allow the club, so it still might be opening once a business license is obtained and the necessary remodeling is completed.

The only recourse the City could take was to pass an ordinance that sets the conditions under which the club can operate. You can read it at www.cityofventura.net/meeting/city-council-meeting-335 (Item no. 3). It is 48 pages long but most of the document just shows the legal justification for the ordinance. Some of the text is pretty amusing because it had to be rather descriptive.

If the business owner feels that the conditions of the ordinance are too restrictive (for instance, if it allowed the club to open only one hour per day), he could still sue the City for denying him his legal right to run the business if conditions are overly restrictive. He still might sue the City, anyway, for other law violations where he thinks the City may have overstepped during this process.

If the club does opens, I have an idea. Since it would be located very close to the DMV, and people hate sitting there waiting for their numbers to be called, they could just be given (if they chose) buzzers like restaurants provide and go to the strip club until they are buzzed. 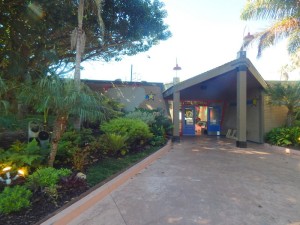 Joe’s Crab Shack has been closed for a future development.

• Joe’s Crab Shack (located on Sanjon) has closed after 12 years of operation. The next closest location is in Redondo Beach.

The property was purchased by developers (oh no, the dreaded D word). The group hopes to develop the entire “triangle site,” as it is referred to. There have been previous attempts to develop this property. The current proposal calls for around 235 luxury apartments. The planning is in its very early stages, and because of the many City and Coastal Commission approvals required, it would take many years before development would occur.

There are those that are for the preservation of historical structures and  think that the restaurant is an important building in Ventura’s history. They believe that the building would qualify as being “exceptionally significant.” A writer for the Star recently wrote a comment suggesting that the design was influenced by Frank Lloyd Wright.

From my perspective, there isn’t anything significant about this non-descript, poorly designed building, and I see no problem with it being demolished. I’m sure Wright would turn over in his grave at the mere suggestion that this building was influenced by him, as he is argued by many to be history’s greatest architect. Certainly, as a retired architect he gets my vote.

By the way, I think that the proposed apartment design is very bad also and hope that it is rejected by the Design Review Committee. I’ll include an image of it in the next issue.

This is a great piece of property with wonderful ocean views. It should be enjoyed by more than just the homeless living on it. It’s unfortunate that the City doesn’t have the means to acquire it, as it would make an exceptional park.

• I find this to be somewhat amusing, but it makes sense when you think about it. On September 23, the Ventura Police Motor Unit conducted a “Court sting operation” to cite individuals leaving the facility driving after having their driver’s licenses suspended or revoked. In addition, another “stakeout” was looking to catch repeat DUI offender probationers who also had suspended or revoked driver’s licenses.

These operations were run as part of a grant from the California Office of Traffic Safety (OTS) which is a year-long program aimed at preventing deaths and injuries on our roadways through special enforcement and public awareness efforts.  The grant aids the city’s ongoing effort to improve traffic safety and quality of life in our neighborhoods.

• Regent Properties is planning a large hillside development. It is in a very early planning stage. The Breeze has included some guest columns regarding this controversial project.

Their plan includes the donation of approximately 720 acres to the Ventura Hillsides Conservancy.

The two parties have entered into an agreement that would result in Regent’s donation of the acreage to the Conservancy. This would create public open space and trails for all of us to enjoy this amazing hillside property.

The “La Viera” project proposes to develop 40 of the 215 acre residential zoned parcel of the site for 55 luxury homes.

We will include additional articles regarding this project in future issues.

• I’m picking on e-cigarettes again. Seen in a recent LA Times: “For teens and young adults, e-cigarettes could be a gateway drug toward smoking traditional cigarettes, according to a new paper published by JAMA Pediatrics.” The study revealed that young nonsmokers who showed no interest in smoking were more likely to take up the habit if they used electronic cigarettes.

• I like to check and validate odd things (what a surprise). The caffeine in a 16 oz. bottle of Coke is 48 mg, in a 2 oz. energy drink it’s 200 mg, and a 16 oz. cup of coffee contains 333 mg. Therefore, per ounce, energy drinks contain much higher concentrations than the other drinks, but a cup of coffee is almost double that of an energy drink. So, why pay the premium for energy drinks (their energy is derived from caffeine), when you can drink coffee at a fraction of the cost (and you can make it yourself)?