On Saturday, August 29th, at 6:12 p.m., an officer on patrol saw a red Ford pickup speeding in the area of Ralston Street and Saratoga Avenue, and ran the vehicle’s license plate number. The vehicle was a reported stolen vehicle out of Santa Barbara. The vehicle immediately began to accelerate away from the officer.

Officers continued pursuing the vehicle, which entered southbound Highway 101.  The pursuit continued and exited Rice Avenue, into Oxnard. Once patrol units from the Oxnard PD were in position, they took over the vehicle pursuit.

The pursuit was terminated near the intersection of Yucca and Las Tunas Place, after the OPD deployed spike strips. The driver, Terrance Trout, was taken into custody without incident.

The Ventura Police Department took custody of Trout and later booked him into the VC Jail. During the pursuit, two female passengers got out of the vehicle in the area of the auto center. Those females were contacted and released. 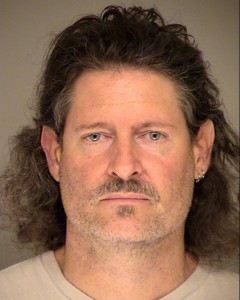 Earlier this year, William Kent contacted the VPD to report fraudulent activity at a vehicle restoration business, Endless Customz, located at 1570 Callens Road. Kent told investigators that the business owner, Robert Kalstrom, sold a vehicle that belonged to Kent and then stole the proceeds from the sale. Kent reported that Kalstrom had also stolen several vehicle parts from the vehicle prior to selling it.

Over the course of the investigation, Major Crimes Detectives determined that Kalstrom committed fraud and grand theft with an estimated loss of over $20,000. While the investigation continued, Kalstrom relocated his business to 6587 Ventura Boulevard.

During the month of April 2015, detectives with the VPD Street Crimes Unit began an investigation into several reported thefts from Bank of America ATM’s at two separate locations in Ventura.

The victims had reported that a suspicious male had been loitering nearby as they withdrew funds from an ATM. A short time later the victims discovered that unauthorized withdrawals in the amount of $400.00 had been made from their accounts.

These ATM thefts began in February and continued sporadically for the next several months. In July, still images of the suspect were posted of the department’s Facebook site.

In August, detectives identified Eric Arteaga as the suspect in these crimes. A search warrant for Arteaga and his residence in Camarillo was obtained and on September 3rd. Detectives served the warrant and arrested him without incident.

On Monday, September 7th, at 5:15 p.m., the VPD received several calls of a possible interrupted vehicle burglary in the 1400 block of Callens Road. One of the suspects, Ricardo Navarro, was being physically detained. Officers arrived and took custody of Navarro.

An adult female had parked her vehicle outside of a business and left her two young children unattended inside. As the female went inside, Navarro and an unknown Hispanic male and white female entered the unlocked vehicle, unaware of the children inside, and began ransacking it. Another family member saw them inside and alerted the others.

All three suspects began running with several family members chasing after them. The unknown Hispanic male and white female got into an awaiting vehicle, being driven by another female suspect, and fled, leaving Navarro.

By that time, a 19-year-old female and her 44-year-old father, both family members of the parked vehicle’s owner, were able to catch up to Navarro, who turned on them and sprayed them both with pepper spray. Unaffected by the pepper spray, the female victim picked up the can and started chasing after Navarro. She caught up a second time and sprayed him in the face with his own can of pepper spray. This incapacitated Navarro long enough for other family members to hold him down until officers arrived.

Possession of a Stolen Vehicle

On Wednesday, September 9th, at 1:25 a.m., a Ventura patrol officer observed a black Dodge Charger parked in the 300 block of Paseo De Playa. The officer was aware a vehicle matching this description had been stolen from the west end of Ventura. The officer confirmed this was in fact the stolen vehicle and waited for additional officers to arrive on scene.

The passenger, Graciela Banuelos was arrested for being in possession of a controlled substance, possession of drug paraphernalia and an outstanding warrant. Both Hernandez and Banuelos were later booked into the VC Jail.

On Wednesday, September 9th, at 1:49 p.m., patrol officers were dispatched to a residential burglary in progress in the 100 block of Barry Drive. As patrol officers responded, a plain clothes detective who was in the area on an unrelated investigation, arrived in the area of the call and saw the two suspects fleeing the area. Once the patrol officers were in the area of Rocklite and Ventura Avenue, they began to search for the suspects. A police K9 was use during the search, and after a few minutes, the first suspect, Jose Vera, was located and apprehended by the K9. As the first suspect was taken into custody, additional patrol officers arrived in the area and began searching for the second suspect. After a lengthy search for the second suspect, Menahem Aguilar, the K9 located him hiding in a yard.

Both suspects were transported to VCMC for the injuries received during the arrests. They were both booked into VC Jail. No one else