Michael O’Kelly’s artistic vision turned to ceramics sometime around the year 2000 when he became interested in architectural design. “That’s the oldest archeological art you can dig up, you’re gonna find bones and you’re gonna find clay!”, he laughed. Starting with “a little mural here and a little fountain there”, it went well until the year 2008 when he lost everything due to the recession. 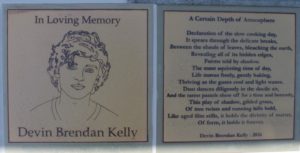 Michael’s work can be seen at the Camarillo library, the Santa Barbara Zoo and 65% of the ceramic tile on the front of Watermark (now Limon y Sal), along with “stuff all over town and throughout California”. He did the facade of the Star Lounge for Mark Hartley and the work at Café du Suro on Main Street, “people think it’s been there since 1903, but we did it in 2006”.

In 2016 when Ventura celebrated its 150th anniversary, it was Christy Weir that encouraged Michael O’Kelly to design a mural that would represent the history of Ventura. “It began with an idea that produced a work of art that would bring the community together, a consensus was then formed to trust an artist to perform those goals”, he told me. Once they decided to go through with the project, they had to go after funding and Michael proudly stated, “the beauty of it is, 99.9% of the mural was paid for by people in the community and those that donated materials and time, I think it’s quite extraordinary to have this all put together by the public”. 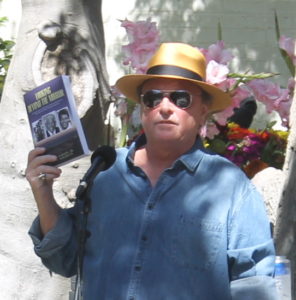 It was Cynthia Thompson, “a very sophisticated historian in town” that put together the spread sheet and created the chronology, “I couldn’t have done it without her”, he said.

“Since I started the mural 3 years ago, five sponsors and people depicted in the mural have passed away, including my son, Devin.” It was Devin’s shared passion for the arts that inspired Michael to keep going. “There were a lot of delays, holding me up as an artist, and now I’m grateful”, he said.

I asked, “because now you are able to dedicate it to your son?” With tears he whispered, “yes”.

“If the mural had been done on time, I would have walked past it every day and wished my son was in there, now he’s in there 5 times”, he smiled. This includes Devin with his mother, Gisele looking back across the entire mural.

“It’s almost like the mural itself is a publication, as it was being done, things were happening in the city and as they were happening, they found their way into the mural, including the Thomas Fire.”

In the mural, a Norman Rockwell paperboy can be seen holding the Star, “why not the Breeze?”, I asked. 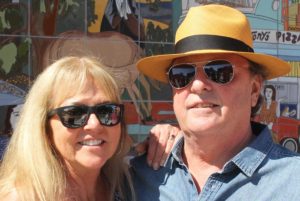 After the completion of the mural, Michael O’Kelly has plans to do film, he’s already done a documentary on Ray Bradbury and plans another on the history of Ventura. He’s started a company called “Dirt and Fire” (website up soon) and confided, “I’ve got another community project, a monumental bronze sculpture to be done here in Ventura but can’t give details”.