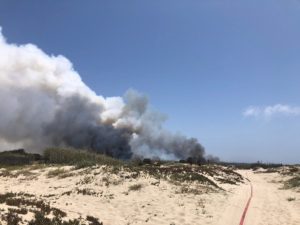 On June 29, at 12:52pm the Ventura City Fire Department was dispatched to multiple reports of a fire burning in the Santa Clara river bed near the Ventura water treatment plant. First arriving firefighters reported a well-established fire burning in vegetation around several homeless encampments. Firefighters used three – 20 person hand crews, a water dropping helicopter and 6 engine companies to eventually contain the blaze at 7 acres after 6 hours.

Harbor Blvd. was closed and River Haven was evacuated as a precaution during the course of firefighting operations. Ventura PD and CHP controlled traffic in support of the fire suppression efforts. The cause of the fire is suspected to be from an escaped cooking fire in one of many homeless encampments in the area.