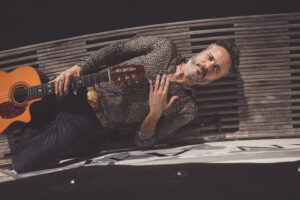 The fire-breathing guitar hero, one of the world’s most impeccable fingerpickers, invites all kinds of audiences to join him for a panoramic evening experience that Rolling Stone Magazine calls “a journey into the heart of music.”

The double Latin Grammy© winner, songwriter and virtuoso guitarist is on tour with the release of Backroads, Volume II—his second “guitars of the world project.” It continues his “motorcycle diaries” like musical memoir southwards to the jungles of Central America. Volume I—his “sojourn of sound on strings” around North America—won the Spanish Independent Music Awards’ “best album of world music” in 2018 for capturing the blues, country, ragtime and electric styles he uncovered during his byway stops between Chicago and Los Angeles. That year Twanguero took the Ventura Music Festival by storm with a pair of performances: during its free post-Thomas Fire community concert outdoors and then the regular July festival.

For his beautiful sequel, the artist traveled to Costa Rica during the pandemic, “to discover, and try to interact with, the tonality of the jungle, its mix of cicadas and crickets, howler monkeys, and array of birds—a symphony of sorts, both day and night.” The humidity changed how his Guitarras Ramírez super guitar sounded. “But the jungle calms your mind down, makes it more reflective, and connects you inwardly and you start philosophizing with your guitar in conversation with the inhabitants of the jungle and with your inner self. The experience made me realize I wanted to tell stories through my guitar, a difficult inward job that you have to translate through your fingers, without the advantage of the spoken word.” Stories of marshland, Patagonia pampa and jungle samba landscapes, explosive ayahuasca jaguar visions and bossa nova, Carib and milonga rhythms.

His electric band travels a cinematic landscape of flamenco smitten with the jangly twang of early American rock and roll—and cumbia, surf and mambo mixed with electric blues and the pachuco grooves of Arizona border music. These sounds evoke the musical journeys of Twanguero’s odyssey from Valencia, Spain, to New York City, and from the Piazzolla’s tango-land of Buenos Aires to his new home in Los Angeles—which he calls “music’s most important, if savage, city where all music styles compete for audience ears.”

If you know his music, you love him already. If you don’t, you will.

Videos with his dynamic band: