Demonstration by residents held in opposition to development. Photo by Richard Lieberman

A recent demonstration by residents who live around and near the proposed Haley Point housing project marched from California and Main to City Hall. The protesters have organized, set up a GoFundMe page and are asking the city to hear their concerns about the proposed project. The proposed development by Warmington Residential is slated for 72-unit condominium project and of those 72 units 14 units, or 20% will be offered below market rate for moderate income households. Each unit will have a two-car garage.

The group now known as Midtown Ventura Coalition has grown using social media to get their message out to residents. “We were notified in August about a zoom meeting with the developer Warmington Residential who wants to build seventy-two townhouses on a 4.2-acre plot near the end of Channel Island Drive where it meets Seaward Ave, we looked at the design and the design is pretty and we liked the way it looked, everyone of us wants to see more housing in Ventura,” said Jim Gibson, a sixteen-year resident of Rancho Drive. “The problem is this is on what is almost a cul-de-sac the far end of a low-density neighborhood where peoples children are playing in the streets,” he added. Gibson also added that the group has reached out to city officials and the developer to express concerns about increases in traffic density and how the city is handling the developer’s requested variances, combining requests for smaller setbacks and fewer parking spaces into one request. 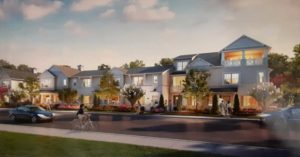 If the decision is not what the neighbors want or if the decision is not what the developer wants it will be appealed. “We fully expect it to be appealed,” said Peter Gilli, community development director for the city. In May 2020, the City Council passed a measure to facilitate processing projects dubbed an Emergency Streamlining Ordinance (EMSO). The EMSO made two changes, according to Gilli, One, a project will still have multiple hearings, with recommendations coming from those boards. But the last hearing body, determined by Gilli according to the ordinance, will “make a final decision on the project” The final decision is also subject to an appeal which puts the project before the city council for a final non-appealable finding.

State law prohibits the city from changing plans when it comes to modifying density or not approving housing developments. “The general plan designation for this site allows more housing than the developer has proposed. That is state law now. Five years ago, it was different. Now if a project complies with the density range of the General plan, then our ability to shrink or deny the project has been eliminated, added Gilli. Before the current plan it was commonplace for the city to demand fewer units even under allowable densities and impose that on the development. “The city can’t do that anymore, the states emphasis is on the housing crisis has taken that away and limited the city’s ability to do things like that,” he said. Adding Gilli said “Our residents have not wanted to hear that answer,” Currently Ventura is in the planning stages of an update covering the existing General Plan. With the update and state law, the city is mandated to approve housing projects that do not conflict with the General Plan.

Haley Point, for the most part, complies with state law and complies with city rules. State law puts the city in a position where they must comply and to grant what the developers are asking for.