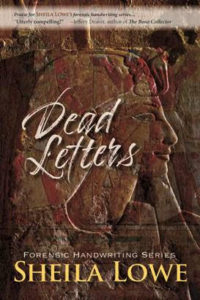 Sheila Lowe announces the formation of Write Choice Ink, a publishing imprint, to produce and distribute the complete catalog of her non-fiction and fiction work. Lowe will re-issue her backlist, totaling 14 of her titles over the next few months, starting with Poison Pen on February 23, 2021, and leading up to Dead Letters, a new Claudia Rose novel that will release on August 3, 2021. The fiction titles will be available across the three primary formats for books – print, digital. Audio versions continue to be available throughout. The nonfiction titles are available in print and digital format.

Sheila Lowe (like her character, Claudia Rose), is one of the world’s leading forensic handwriting experts. She is frequently engaged by attorneys and government agencies to verify handwriting and signature authenticity on official documents.

“After 16 titles, over 200,000 copies sold, and more than 20 years in traditional publishing, I felt the need to secure the rights to my currently published work and have greater control over my publishing career,” says Lowe.

Ms. Lowe has secured the publishing rights to all of her current works, including four of her six books on handwriting analysis and ten novels of suspense—eight featuring Claudia Rose, a professional handwriting consultant, and the two titles in the new “Beyond the Veil” paranormal series. Lowe also developed two versions of a handwriting analysis software program and an Independent Study Program in Gestalt Graphology, both of which are used around the world.