by Venturans for Responsible & Efficient Gov’t

Ventura’s unfunded pension liabilities continued to grow in 2019 to $218.6 million. The City of Ventura continues to sink deeper into debt to pay for city employees’ present and future retirement benefits. Unfortunately, the economic reality of the city’s current public pension liabilities is not receiving the attention it demands. 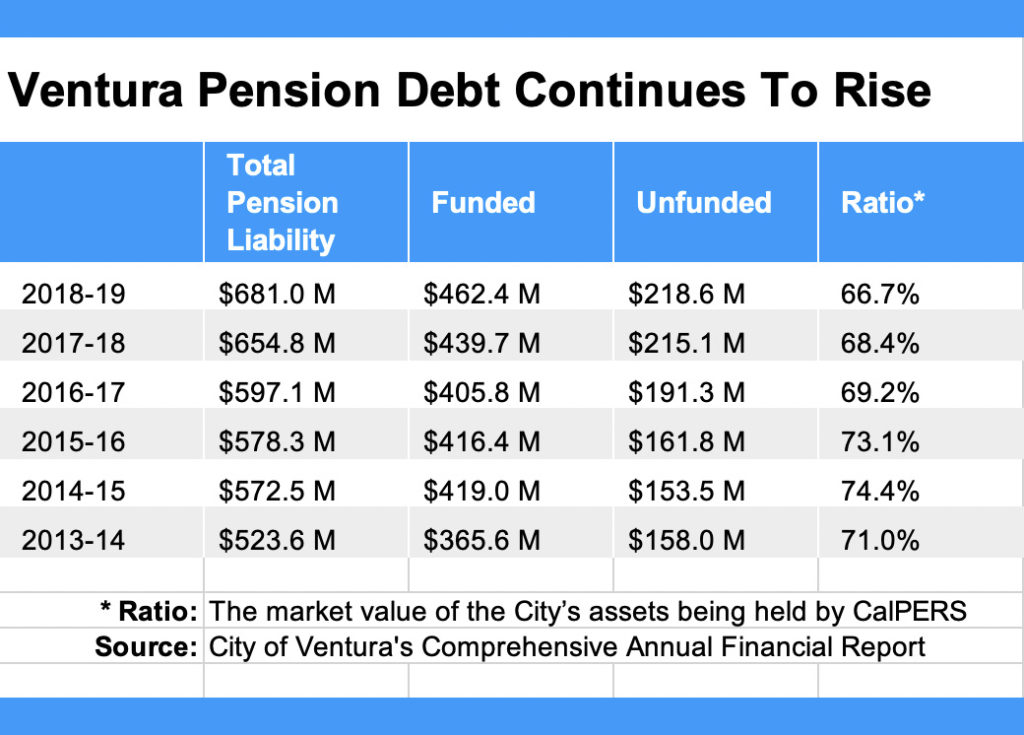 A Political Hot Topic
Discussions about pensions get emotional because we’re talking about people’s future and security. Let’s be clear. We respect the work city employees do. There is no denying that fire and police perform a vital job that is both dangerous and requires a high level of training and responsibility.

Our concern is not about their work. We’re uneasy about how the city structures, accumulates and pays retirement benefits.

Neglecting The Unfunded Pension Liabilities Doesn’t Make Them Disappear
For ten years, Ventura has done little to remedy the unfunded pension liability. During that time, there have been four different City Councils. Yet, they made only a modest effort to solve the problem. Then-Mayor Bill Fulton and City Manager Rick Cole claimed in 2011 that the City of Ventura had tilled new ground by requiring the city employees to pay something toward their retirement – 4 ½%.

Suggestions For Addressing Unfunded Liabilities
There are two other choices for our City Council to consider if they have the political will.

1. Make beneficiaries pay more. Capping the employer contribution at a fixed percentage of salary would cut pension costs for the city. As pension costs increase over the years, the employees will pay all the growing costs.

2. Change when retired city employees may begin collecting pensions. This alternative solution applies to new employees only. What if police and fire could vest their generous pensions in full by age 50 or 55, as they do now, but the payments did not start until age 65? At current official pension growth rates, that would more than double the fund’s value over those ten years. Also, the retirement payment period would be ten years shorter, given the same life expectancy.

Raw Political Power Behind Unfunded Pension Liabilities
Ventura’s city employee unions negotiate higher and higher salary increases disregarding any concern that the money may not be available to pay their pensions once they retire. Union negotiators believe a virtually ironclad guarantee exists for the workers to whom the city promised the pension benefits. Many Councilmembers accepted the same thing, although it’s no longer valid. A Federal Bankruptcy Court ruled otherwise in January 2015.

The impact of this decision is that CALPERS cannot stop cities from modifying pensions. Yet, the Ventura City Council appears unaware of the findings.

Editors Comments
Past retirement pension negotiations were based on union bargaining and raw political power, creating a gap between what politicians promised and what cities can really pay. It will take political will to bring the retirement benefits back to reality. Changing the system is the only way these promised benefits can be sustainable and dependable for retirees. It’s also the only way that taxpayers can afford to pay for them.