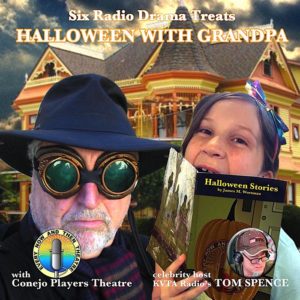 Not going out to trick-or-treat the neighbors. Staying in and staying safe? Want all the chocolate for yourself? Settle in and turn on your radio for some chilling, thrilling tales to listen to by the light of the full moon.

The Every Now and Then Theatre has chosen this Halloween to bring forward a new dramedy in partnership with Conejo Players Theatre in Thousand Oaks. This year’s offering will be “Halloween with Grandpa” six stories featuring numerous well-known Ventura County talents.

Hosted by Celebrity Guest Host, KVTA radio personality Tom Spence, the one hour nationwide, streaming, commercial-free broadcast will air via www.kvta.com on Friday October 30 at 6:00 a.m. (yes, you read that right!) and 1:00 p.m. PT and again on Halloween, Saturday, October 31 at 6 a.m., 1 p.m., 5 p.m. and 9 p.m. PT. Click on Listen Live to tune in. Then just sit back and enjoy.

The stories, titled They’re Here, Worldwide Wives Conspiracy, Headless Pumpkin, Careful What You Wish For, Haunted House, and Nosey Neighbor’s Computer, are sure to delight and possibly fright.

The all-volunteer troupe is allowed only one rehearsal before performance. The mix of seasoned professionals and promising beginners such as Aubree, Tom Spence’s daughter, who making her acting debut to hear grandpa’s six stories, is a proven blend. “It’s a free treat” says Spence. “No travel, no dress code, …get your snacks and relax.”

All Every Now and Then Theatre’s productions benefit foster children by providing broadcast copies to cast and supporters in trade for their donations to KVTA radio’s Children Services Fund. Listen for how you can support this mission and get your own copy of the broadcast after it has aired.

Every Now and Then Theatre, founded and helmed by James Wortman, has been offering sterling performances for Ventura County and beyond audiences for the last 30 years. The Troupe has garnered 54 awards internationally since 1990 for their high-quality radio productions. Find more information about the Troupe at www.everynowandthentheatre.com and on Facebook. Like, follow and support.

Conejo Players is gearing up for Haunted Broadway Drive-in Theater this coming weekend, October 23, 24 and 25. There may be a few tickets left for this haunted musical adventure if you’re lucky as word has it the event is almost sold out already. www.conejoplayers.org. Cannot attend but want to be involved? Volunteers are always needed for future live streaming projects. Contact Executive Technical Director Jeremy Zeller at documents@conejoplayers.org to see how you can lend your talents.