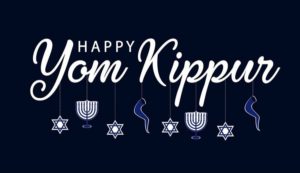 Yom Kippur is the holiest day of the Jewish year, when we are closest to God and to the essence of our souls. Yom Kippur means “Day of Atonement,” as the verse states, “For on this day He will forgive you, to purify you, that you be cleansed from all your sins before God.”

Yom Kippur is on the 10th day of Tishrei (in 2020, from several minutes before sunset on Sunday, September 27, until after nightfall on Monday, September 28), coming on the heels of Rosh Hashanah (the Jewish New Year, which is on the first and second days of Tishrei).

For nearly 26 hours we “afflict our souls”: we abstain from food and drink, do not wash or apply lotions or creams and do not wear leather footwear. Instead, we spend the day in synagogue, praying for forgiveness.

Just months after the people of Israel left Egypt in the year 2448 from creation (1313 BCE), they sinned by worshipping a golden calf. Moses ascended Mount Sinai and prayed to God to forgive them. After two 40-day stints on the mountain, full Divine favor was obtained. The day Moses came down the mountain (the 10th of Tishrei) was to be known forevermore as the Day of Atonement—Yom Kippur.

That year, the people built the Tabernacle, a portable home for God. The Tabernacle was a center for prayers and sacrificial offerings. The service in the Tabernacle climaxed on Yom Kippur, when the High Priest would perform a specially prescribed service. Highlights of this service included offering incense in the Holy of Holies (where the ark was housed) and the lottery with two goats—one of which was brought as a sacrifice, the other being sent out to the wilderness (Azazel).