Black Owned Businesses to Be Identified by Yelp

Yelp is launching a new feature allowing black-owned companies to identify themselves. The function will ultimately make it easier for users to find and support black-owned businesses.

The company’s philanthropy arm is also donating $500,000 each to the Equal Justice Initiative and NAACP Legal Defense Fund and employees will have additional mental health days off in June, the company said. The company is also matching and doubling employee donations made to various black-led and black-serving organizations throughout the month of June.

“There can be no going back to ‘business as usual’ when the protests, tweets and news cycle die down. We all have to do our part to get educated, and we must use our voices, votes and whatever power and platform we have to reject racism in all its forms, until we put an end to this oppression that has plagued our country for centuries,” CEO Jeremy Stoppelman wrote.

The suit was filed in the U.S. District Court for the Northern District of Illinois Tuesday, according to Yahoo. Franchisees say in the complaint that they faced “systematic and covert racial discrimination,” with McDonald’s denying them the same opportunities as their white counterparts.

The franchisees say they lost more than 200 McDonald’s locations over the past decade because of misconduct by the company. Dozens of other Black franchisees were forced out of the chain over the past two decades. According to the complaint, there are only 186 Black McDonald’s franchisees, down from 377 in 1998.

The complaint added the plaintiffs’ average annual sales of roughly $2 million were more than $700,000 lower than McDonald’s national average of $2.7 million from 2011 to 2016

“These differences are statistically significant and are the result of Defendants’ racial bias and barriers within the McDonald’s franchise system,” the complaint states.

In a video message to employers and suppliers Tuesday, McDonald’s CEO Chris Kempczinski responded to the allegations. “When allegations such as these occur, I want them investigated thoroughly and objectively,” Kempczinski said. “That’s been our approach to this situation. Based upon our review, we disagree with the claims in this lawsuit and we intend to strongly defend against it.”

In a statement to Business Insider, McDonald’s categorically denied the allegations, saying that they “fly in the face of everything we stand for as an organization and as a partner to communities and small business owners around the world.” In July, the fast-food chain promised to improve diversity at all levels of its systems, including franchisees and suppliers.

Netflix CEO Reed Hastings and wife Patty Quillin committed $120 million to two historically Black colleges and the United Negro College Fund, making it the biggest individual donation ever to support scholarships at HBCUs in a bid to “reverse generations of inequity” in the U.S.

The donation will enable 200 four-year scholarships over 10 years for students at Spelman and Morehouse Colleges in Atlanta. Along with the UNCF, each institution will receive $40 million.

The couple said in a statement: “Both of us had the privilege of a great education and we want to help more students – in particular students of color – get the same start in life.”

“As the U.S. searches for ways to start addressing the inequities faced by Black people, UNCF, Spelman and Morehouse urge other philanthropists to invest in HBCUs—institutions that improve mobility and create new generations of leaders, increasing justice, equality and opportunity in America,” a statement from Spelman read.

Spelman College president, Mary Schmidt Campbell, said of the donation: “It’s going to mean that every year we’re going to be able to identify 20 high-performing students, high-need students and say to them ‘you get to go to college debt-free.’”

Separately, Hastings donated $1 million to the Centre for Policing Equity earlier this month, in the wake of George Floyd’s death.

Hastings and Quillin added in their statement: “HBCUs have a tremendous record, yet are disadvantaged when it comes to giving. Generally, White capital flows to predominantly White institutions, perpetuating capital isolation. We hope this additional $120 million donation will help more Black students follow their dreams and also encourage more people to support these institutions – helping to reverse generations of inequity in our country.”

The philanthropic couple are longtime advocates for education reform, and in 2016 the Netflix co-founder established a $100 million Hastings Fund to expand “rich and holistic” educational experiences within communities. That fund previously donated $1.5 million to the UNCF.

HBCU endowments are notably far lower than non HBCUs. Last year, Howard University ranked the highest among HBCUs with an endowment of nearly $700 million and Spelman ranked second with almost $400 million, according to website HBCU Money. Harvard’s $39 billion endowment is dramatically higher than the total $2.1 billion endowment for all HBCUs in 2019. 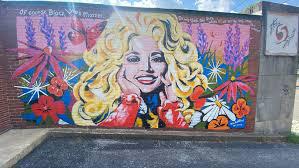 Tourists are flocking to Nashville to see a new mural of Dolly Parton that celebrates her position on Black Lives Matter.

Mural artist Kim Radford had already decided to paint the mural of the country music icon on the side of a local music club called The 5 Spot, which was made famous for being one of the many filming locations for the TV show “Nashville.”

But as she was finishing the mural, Radford saw an article from Billboard in which Parton said she supported the Black Lives Matter movement, saying “Of course Black lives matter. Do we think our little white asses are the only ones that matter?”

Washington, D.C., Mayor Muriel Bowser said she fears the U.S. is ‘descending into a race war’ as violence across the country continues and the FBI probes a potential network of domestic terrorists who may be traveling to protests.

“What I’m worried about is this country descending into a race war,” Bowser said at a press conference on Monday, adding that an increase in police forces in some cities, like Portland and Seattle, has created more anger among protesters.

“And I’m worried about the continued incitement of violence from leadership who should be focused on bringing our communities together. Our police and peaceful protesters will be safer when we come together as a community and tamp down this Black-versus-white rhetoric,” Bowser added.

D.C. Metropolitan Police Department has arrested 527 individuals for curfew violations riot-related to burglary and other violations between May 30 and Sunday, according to department data. Of those arrested, 44% were from the District of Columbia, 27% from Maryland, 12% from Virginia, and 4% from other states.

Bowser also criticized prosecutors for being too soft on rioters who were arrested freeing them up to return and create more carnage.

“When we make an arrest for violent protests, we need those violent agitators to be prosecuted. … There hasn’t been a willingness from the US Attorney’s Office to prosecute them,” she said.

Protests have been occurring in the nation’s capital all summer. In June, President Trump had the Secret Service tear gas Black Lives Matter protesters so he could take a photo outside St. John’s Episcopal Church. Later the same week, protesters posted their protest signs on the fence the Secret Service installed outside the White House as an extra security measure.

Multiple cities including New York, Los Angeles, and Bloomfield, CT, have also erected large scale Black Lives Matter murals including one outside of Trump Tower, which the president called ‘a symbol of hate.’

“My humanity is bound up in yours, for we can only be human together.”