About 200 people attended a protest at the statue.

A demonstration was held. on Saturday, June 20, to demand that the statue of Father Junipero Serra in front of Ventura City Hall be taken down on grounds that he had committed atrocities against Native Americans, including the local Chumash.

Father Serra is credited with bringing Catholicism to California but many blame him for what they say were his efforts to do away with Native American culture in California and for the premature deaths of thousands of indigenous people.

Ventura Mayor Matt LaVere, representatives from the Barbareño/Venureño Band of Mission Indians and Father Tom Elewaut, the pastor of Mission San Buenaventura, agreed and issued a joint statement agreeing to take down the statue and have it moved to a more appropriate non-public location. See copy of it in this issue.

“We have listened, and we have heard the calls from those in the community and believe the time has come for the statue to be taken down and moved to a more appropriate non-public location. We all believe that the removal of the statue should be accomplished without force, without anger and without uncivil discourse, much less vandalism,” the joint statement reads.

Tension built for a time at the rally as a group formed a ring around the base of the statue to protect it from being taken down. Ventura Police Department patrol units arrived and the tension subsided. The protest concluded peacefully with no arrests or further problems.

Those gathering represented a mix of views. Those who want it removed and those who think it is an important part of our history and should remain where it is.

The first statue was created by John Palo-Kangas in 1936. It was replaced in 1989 by a statue made from the wood carving by the late Wilbur Rubottom that is on display in City Hall atrium. Rubottom Cabinets is still located in Ventura and run by members of his family.

Elewaut said “I can’t say that I agree that the statue should come down. But I will acquiesce to it if it helps bring some healing to the present-day Chumash community. Father Serra saw himself as a spiritual father for the indigenous people. Were people decimated? Yes. I understand the hurt and the loss of culture that the indigenous people experienced.”

“In recent weeks, the City of Ventura has received a groundswell of feedback from the public on the Father Junipero Serra statue. We want the community to know that we are receptive to their concerns and seek to provide a peaceful environment where all voices are heard and respected,” stated Ventura City Manager Alex D. McIntyre. “This is an historic decision and must involve the voices of the Chumash tribe, the Mission San Buenaventura, residents of Ventura, and the City Council.”

The public is invited to join the Ventura City Council for a virtual community discussion on Tuesday, July 7, 2020, at 6:00 p.m. about the Father Junipero Serra statue. The special public meeting will include the Ventura Mayor, City Council, and city leadership.

You can share written responses online by visiting www.CityofVentura.ca.gov/FatherSerra. All responses will be shared with the City Council.

Once removed the big question is where should it be relocated? The Breeze would love to hear our readers thoughts at editor@venturabreezse.com. 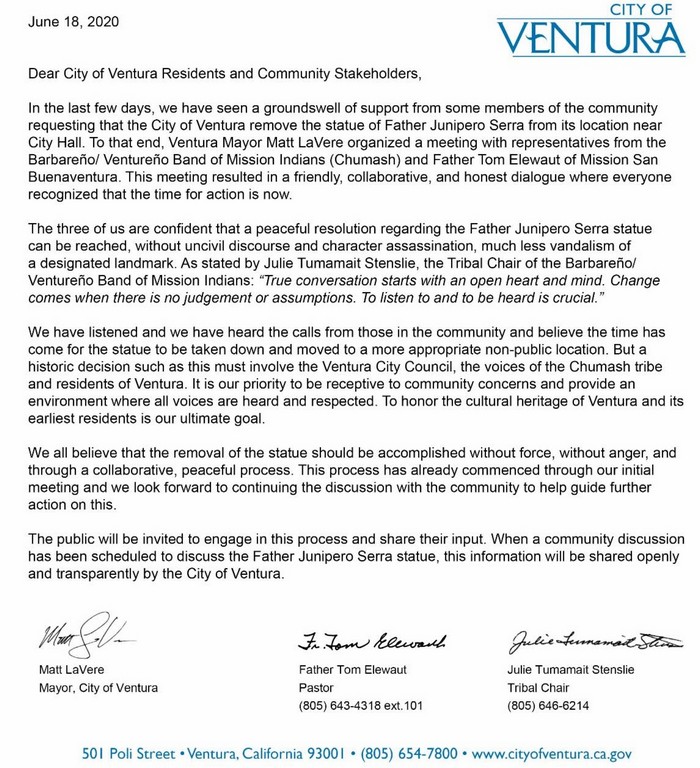