Thanks to everyone who joined us at the CAPS Media Center on Sunday evening for the 2020 Open House, Oscar Party and 3-year Birthday Bash for KPPQ 104.1 FM. Dozens of folks were on hand to meet new friends, re-connect with existing friends, take tours of the center, and share in the recognition of CAPS Media’s continued service to the Ventura community. At a time when civic engagement, public communication and public voices are vital to our community, CAPS provides an extremely valuable resource to everyone in Ventura.

Part of the celebration was the recognition of a new contract for CAPS Media awarded by the City of Ventura. The CAPS Staff, Board of Directors and especially the CAPS Member/Producers thank everyone who sent letters, videos, and emails, and made calls to City staff and City Council Members, and to those who showed up at the City Council meeting expressing support for CAPS Media. The personal appeals and overwhelming expressions of appreciation were instrumental in demonstrating CAPS’ value to the community at large and to the City, and encouraged the City Council to approve the contract for CAPS Media. Everyone at CAPS thanks the City staff and City Council Members for recognizing CAPS value and awarding the long-range agreement which provides stability needed for CAPS Media to continue serving the community. 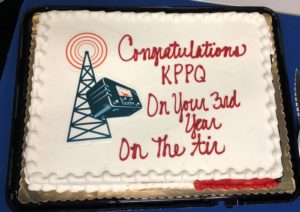 In addition to recording, broadcasting and streaming meetings at City Hall and other City events, another example of CAPS Media’s facilitating community communication is the ongoing coverage of community council meetings throughout the city. CAPS works with the community council coordinators to record key meetings of the College Area, East Ventura, MidTown and Westside Community Councils. CAPS records the meetings and broadcasts and streams them the following week, allowing community members, who are unable to attend the meetings, the opportunity to view the monthly meetings on CAPS channel 6 and online on the Thursday following the meeting at 8pm. Many of the community council groups post the meetings on social media as well. Local Community Council meetings are a great way for Ventura citizens to interact with and receive first-hand reports on City services and plans from City Councilmembers and Ventura Police Department officers as well as other officials and leaders in the community. In addition to getting the overall city perspective on important issues and events, the community meetings focus on neighborhood issues and information of interest and importance to the specific districts in Ventura.

This is a great time to join CAPS Media. CAPS is Ventura’s only public access television and radio center that fulfills a fundamental right guaranteed by the First Amendment. As a free society, the public has the right to have personal opinions published in the newspaper and on the airwaves. CAPS Media provides Member/Producers the opportunity to express themselves on local television, radio and online. Some people refer to CAPS Media as Ventura’s electronic soapbox.

The highly professional and extremely friendly CAPS Media staff train members how to master the use of cameras, editing equipment and radio studio to produce their own story. Video production services are provided for an annual membership fee of only $40. CAPS Radio requires an additional annual fee of $50 for DJs. Go to capsmedia.org/events to learn how to register for upcoming classes and become a Member/Producer.