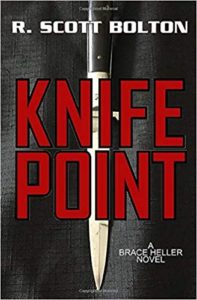 The writing career of Venturan R. Scott Bolton got off to a solid start thanks to Mrs. Molitz, his fifth-grade teacher, who encouraged his continuing series of Godzilla stories. Since then, he has written film and screen reviews and dozens of short stories, screenplays and novels. He was also a main contributor of reviews for the annual Ballantine Books publication, “Video Movie Guide,” edited by Mick Martin & Marsha Porter and is the founder/publisher/editor of Rough Edge, an online hard rock/heavy metal magazine (located on the web at www.roughedge.com).

Bitten by the radio bug in 2002, R. Scott Bolton appeared on KVTA radio as the co-host of the Burt Rosen Show and as Scott the Video Guy on The Tom Spence Show. Soon after, he created the Internet radio show Rough Edge Radio, which he has co-hosted since 2004, as well as the Backseat Mogul Show (2006) and the Friday Shot Day Show (2006), all of which currently air on RoughEdgeFM.com

Bolton lives in Ventura with his wife Shelley, his son Josh and their beloved dogs, Leo, Zoey and Pretzel. He loves hearing from readers (and listeners of RoughEdgeFM) and encourages them to write him at rsb@rscottbolton.com.