The cost and benefit of every spending decision by Ventura’s City Council is magnified as the city faces budgetary losses for the next five years. The city is projecting to have a $10-$25 million shortfall, so the City Council should be more careful how it spends tax dollars. Are we getting our money’s worth from our Councilmembers’ travel to conferences and seminars?

The City Councilmembers don’t think anyone is watching their spending or cares what they do. They believe voters gave them the mandate to be concerned with the details of how and where the city spends money. And, they’re right—to a degree. While citizens fret over the large expenditures on pensions, water, public safety, and staffing, it’s easy to overlook the spending habits of our elected officials.

The city publishes the expenditures by each sitting Councilmember quarterly. Here’s a summary of the expenses for the past three full fiscal years of the active members of Council: 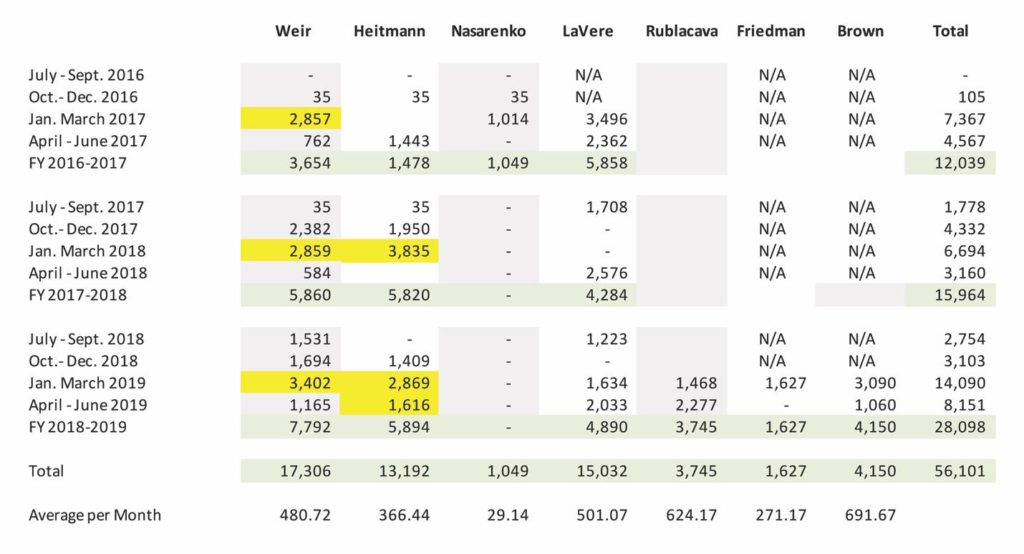 Highlighted in yellow is the amount spent each year to attend the National League of Cities (NLC) Conferences. The NLC holds regional conferences and a national conference in Washington, DC.

Ventura taxpayers get little information about the benefits the city derives from these conferences. There are no written reports of what the attendees accomplished.

If all the value we receive is a report on the “relevant legislative issues from the NLC,” do we need to send representatives to Washington, D.C.? Couldn’t we get the same information by email or in written form? If we did, there would be a permanent record of the discussions for others to review.

The Value Is In The Connections

The justification may be to learn the “best practices” from other cities attending the conferences. What best practices did we learn on homelessness from representatives from Sacramento, Los Angeles, San Francisco, or Seattle? Homelessness in those cities is worse than it is in Ventura, and it’s not improving. Or did we learn something about water from Sacramento? Except, the California River Tunnel isn’t working out so well. Or did the reps from Washington, D.C., or Sacramento teach us about budgeting? The fact is, our reps need to convey any best practices we learned at those conferences need to city staff. The staff are the ones to put in place new ideas in City Hall. And without written guidelines, implementing the changes is nearly impossible.

The truth is any networking with others at these conferences is nothing more than socializing. Should we pay the expenses for two Councilmembers to hobnob with politicians? No.

Mayor Matt LaVere, Deputy Mayor Sofia Rubalcava, and Councilmember Brown are attending the National League of Cities Regional Meeting in Long Beach, CA, on October 16-18, 2019. What value will Ventura get from sending three Councilmembers to this meeting?

In the best of times, these conferences may benefit Ventura, but these are not the best of times. The city faces a multimillion-dollar shortfall over the next five years. Frivolous spending of any kind must not happen, regardless of the dollar amount spent. Spending taxpayer money on these seminars and conferences may appear to be harmless at first. Still, scrutinize each trip to decide whether it’s a necessity. And if it is determined to be necessary, the value must outweigh the expense.