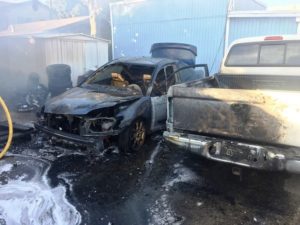 On Nov.12, at 3:07pm, the Ventura City Fire Department units responded to a reported structure fire in the 100 block W. Harrison Ave.. The first arriving crew found a storage shed and two vehicles on fire. Numerous calls were received as the smoke was visible for blocks. Crews initiated an immediate fire attack and achieved knock down very quickly. Firefighters completed overhaul and ruled out extension further into the uninvolved portion of the building and all adjacent structures.