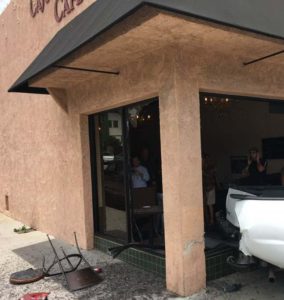 On July 9, at 1:10pm, fire units responded to a reported vehicle that drove in to the front of the Cajun Kitchen restaurant located at 301 E. Main St. Upon arrival, firefighters quickly assessed the scene for injured victims and simultaneously assessed the structural stability of the building. It was discovered that there were 4 injured parties. The driver, who was solo occupant of the vehicle, was transported via ambulance to a local emergency department. The other 3 victims declined ambulance transport.