Thousands of cyclists and volunteer ?roadies? will embark on a 545-mile journey from San Francisco to Los Angeles, from June 4 through 10, united by a common cause: fighting to end HIV/AIDS. Over 2,200 cyclists camped overnight at San Buenaventura State Beach in Ventura on the way to Los Angeles. They also held their annual Candlelight Vigil to remember those who have died from AIDS. If you fear you’ve contracted AIDS recently, or someone close to you may have, you’re able to check your health here with a guide into the different Sexually Transmitted Diseases and the symptoms of each.

This year, AIDS/LifeCycle participants raised more than $15.1 million to support the San Francisco AIDS Foundation and the HIV/AIDS-related services of the Los Angeles LGBT Center. Participants are ages 18 to 97 from nearly every state. 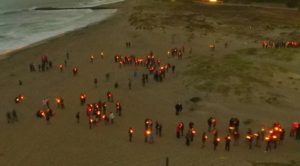 Now in its 16th year, AIDS/LifeCycle is a fully supported, 545-mile bike ride?not a race?that raises important awareness about the ongoing HIV/AIDS epidemic, in addition to funding services such as HIV testing and screenings for other sexually transmitted infections, HIV medical care, prevention services, and more.

Since 2002, when AIDS/LifeCycle first began, participants have raised more than $236 million and completed more than 58,000 journeys on bikes from San Francisco to Los Angeles.

?We?re living in unsettling times when the health care of many Americans, including those living with HIV or AIDS, is at stake,? says Los Angeles LGBT Center CEO Lorri L. Jean. ?That?s why we?re more grateful than ever for the heroes?and sheroes?of AIDS/LifeCycle who are journeying 545 miles to help end AIDS and care for those living with HIV.?

The HIV/AIDS epidemic is far from over. Currently there are 1.2 million people living with HIV nationwide and an estimated 39,000 will become infected this year.

For more photos go to www.venturabreeze.com