Andrew Pyler volunteered to clean the pieces as part of his Eagle Scout project.

After sorting through more than 14,000 artifacts to find 75 that best represented the history of the Seabees, the curator for exhibits at the U.S. Navy Seabee Museum in Port Hueneme needed to get them ship-shape for display.

So when Andrew Pyler, 14, of Port Hueneme, volunteered to clean the pieces as part of his Eagle Scout project and oversee the work of the rest of his Boy Scout troop, Kim Crowell, Museum Curator welcomed the help. Andrew is directing the efforts of the six other boys in Boy Scout Troop 234.

“They’ve been very careful,” Crowell said, noting the boys have been diligent in their cleanup and cataloging efforts. “We appreciate the help while we have it.”

They’re meticulously and painstakingly cleaning such items as a bombshell cigar holder that Rear Adm. Ben Moreell owned in the 1940s when he founded the U.S. Navy’s construction battalions — CBs, hence the nickname Seabees — that are devoted to engineering and construction projects around the world. 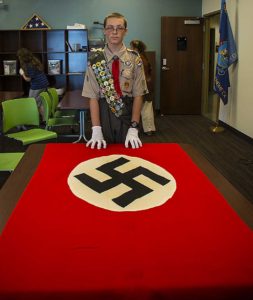 “Some of these things are so fragile,” said Andrew, who lives in Port Hueneme and is homeschooled. “We have some very delicate flags that just take a light brush. Others need vacuuming. And to remove residue, others need to be polished.”

Andrew said that the Scouts had to be taught what should or shouldn’t be removed or cleaned.

“With boots from Vietnam that still have dirt from Vietnam on them, we keep the dirt and just dust them,” he said.

All 75 of the Seabee artifacts are being photographed so they can be displayed on a website that will commemorate the Seabee’s 75th anniversary next year. Then they will be placed throughout the Seabee Museum as part of its upcoming 75th anniversary exhibit. The various artifacts tie in to some aspect of Seabee history. For example, there’s a large wooden four-sided, flat-top pyramid that represented the effort of all U.S. troops in the 1990s who were in Haiti to help the country establish a democracy.

A featured artifact is a gold-plated Al Kadesih sniper rifle, which was fashioned after the Russian Dragunov rifles and was captured from the collection of Uday Hussain in 2003 in Baghdad. Uday, the eldest son of Saddam Hussein, was killed in a gunfight in 2003. “He would give them as gifts,” Crowell said of the gold-plated rifle, “He had cases of them.”

Elaine Pyler, Andrew’s mother, said the Eagle Scout project is going beyond helping the community: It’s teaching the young people about the past. “When they touch the artifacts, they touch history,” she said. “It’s great to learn what the military does and especially about the Seabees.”

“This troop is sponsored by the Navy Seabee Veterans of America Island X-7” he said. “We emphasize core values, duty to country and service to God. Andrew has worked hard,” he added.

Several Seabees are helping out with the cleaning project alongside the Boy Scouts. As part of their documentation, the 75 artifacts had to be carefully lit with a dark backdrop. Professional equipment had to be used to photograph each artifact and identifying information.

Zachary Marble, who is in a school on base and learning the basic job skills of a Seabee, said he was enjoying the project.

“It’s fun,” he said, noting that one artifact is a flag that Seabees carried across the Rhine River during World War II and brought back to the United States. “We’re seeing all this history, and it is getting ourselves into the history.”

Community volunteers are also helping with the project. Lee Burke, of Camarillo, who was taking photos of the artifacts, believes chronicling history is essential.

“Being a historian and being a photographer, I think it’s very important to see those memories in the objects,” Burke said. “This is how we will share them together.”

Crowell said much of the display will be open to the public in January, in plenty of time for the official 75th anniversary of the Seabees on March 5