Ventura High School team members getting ready to defeat all.

More than 1000 students from high schools in Southern California participated in a competition utilizing robotic technology to breach moats, shoot large balls, and capture castles during the Robotics Stronghold Competition held at Ventura College in March. Forty-two teams from Southern California and four from China competed in the medieval themed event.

Joshua Ceth Vida Gazone from Kearney High School San Diego gave the Breeze a tour of the “Pits” and explained the program in detail. “I started with Legos, putting them together, and taking them apart. Then I learned how to put Legos together so they could pick up other Legos.”  “It all started out with Legos, and when I came to San Diego and joined the Robotics Team at the high school it progressed from there.” Said Gazone. Currently studying Mechanical Engineering, and enrolled in the Engineering Innovation and Design program with a solid 4.0 grade average since the ninth grade. Student ambassador to the event Gazone “so I help out with media and others explaining the event and the program” he added. With a perfect 4.0 since 9th grade Gazone is hoping to apply and be admitted to SDU to major in Mechanical Engineering. 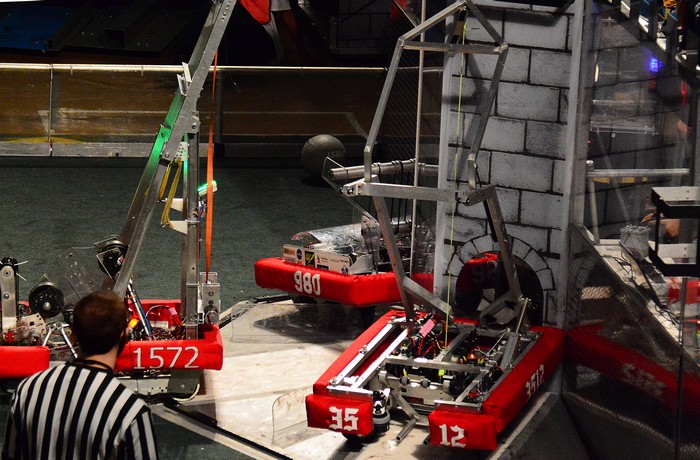 “The goal of the competition is to use teamwork to solve engineering problems” said FIRST (For Inspiration and Recognition of Science and Technology) Regional Southern California Director Steve Stark. Students in the program make their own parts, design their robots, and build them. The competition requires student machines to perform a series of tasks. Beginning with the first 15 seconds the robots must perform autonomously, then they are operated manually by students for the duration of the match.

The machines are required to breach an outer wall, hurl balls at the opposing team’s castle, and scoring points for every ball that lands in the castle. Scoring enough points the robot then can climb a wall and win the tournament.

The teams have six weeks to build, program and test the robots, and in addition to the building activities students will be presenting essays, safety and business plans, strategizing and scouting other teams for their strengths and weaknesses.

The winning regional teams will go on to St Louis to compete in the world competition. This year more than 5000 teams, amounting to 78,000 students world-wide will compete in the program. The students 13-18 will receive instruction from teachers and guidance from mentors. Mentors will aid the students in the fields of engineering, manufacturing, and business. They will help the students to build their robots, and to form their business plans.

The Ventura team “The Circuit of Life” won a spot on the World Championships held in St. Louis April 27th to April 30th. In St Louis they will face 600 teams from across the globe.