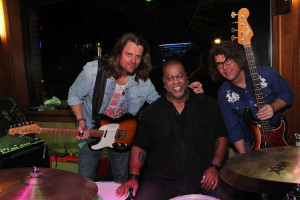 First off, I’d like to wish you a very happy new year.  I’m already hearing the rumblings of changes coming to Ventura’s music scene; they’re good changes too. As they’re verified and come to fruition, you know I’ll be passing along the good news to you.

Ozomatli was indeed the perfect way for Discovery Ventura to kick off their music line up for the new year with a packed-to-the-gills house. Spencer the Gardener warmed up the crowd getting everyone in the dancing mood.  Spencer Barnitz describes the band as a rotating list of stellar players and that evening they added to the mix for the first time trombone player Skabone Stan who tours with Pato Banton. Discovery’s two-year anniversary is coming up the week of January 18th.  I’m looking forward to many more cool shows there.

As you can tell, I’m always delighted to learn and meet talented musicians who have worked as session musicians and/or have toured in support of world renowned artists because you have to be that good; and I found out first hand just how good they are as a couple of hot drummers have been playing around town.  First Shawn Jones has had drummer Herman Matthews with him the last couple times he played Sunday afternoons at W20 at the Watermark.  Matthews has toured with Tower of Power, Kenny Loggins and more than seven years with Tom Jones.  Then there’s Alvino Bennett playing with the likes of Stevie Wonder, Robin Trower, Chaka Khan and he’s about to go out on tour once again with Dave Mason; he was spotted at one of Tommy Marsh’s blues jams at Bombay’s and then sat in with Shawn Jones switching seats with Matthews for a couple of tunes this past Sunday.

Gypsy Stew will be releasing a new CD this month with half the 12 songs being originals.  Don Cook of the band said the music is what they like to call “Outlaw County,” old school as opposed to new country. The CD will be available at their shows as well as on their website GypsyStew.com. They’ll be playing at the Star Lounge Friday, January 8. The release party will be at the Chop Shop Bar & Grill in Simi Valley on Saturday January 23.

And finally, Ventura is losing one of its own, Russ Camp (4 on the Floor, Stundexim, Camp Franco) when Camp moves up north; one of his final shows will be with BOHICA at Golden China on Saturday January 9 5:30 – 9:30 pm.  Camp has been a mainstay in Ventura for over 20 years always supporting other bands and filling in when needed. He’ll be missed.