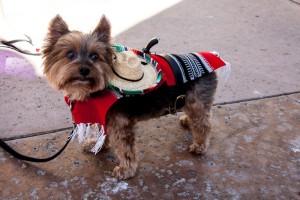 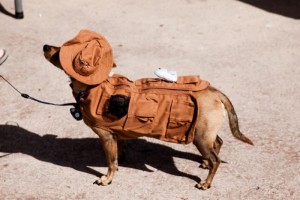 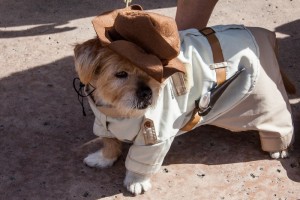 A few of the winning dogs at Howl-o-ween.
Photos by Bernie Goldstein

•  Hundreds of Howl-o-ween watchers lined the walkways around the stage at Ventura Harbor Village for the annual village event where dogs were judged for their best costumes. Ventura Breeze contributing photographer Bernie Goldstein was one of the judges (his photo was taken by Breeze contributing photographer John Ferritto). Sixty seven dogs in costumes were registered, considerably more than the 30 entries when the event was first introduced three years ago. 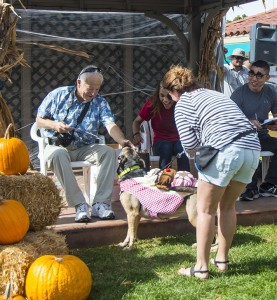 Bernie stated “I was privileged to sit on the canopy covered shaded stage as one of three judges. We were each given a clipboard and asked to each select three candidates of each of the five categories.

Dog owners brought their pets dressed in a wide variety of costumes and outfits; some came as brides and grooms, witches, bees, walruses, chicken, pirates, lions and more. Best in Show category winner was a Boston terrier costumed as a walrus being towed in a wagon with stuffed walrus’s.”

•  Over that last several months, there has been an increase in citizen reports of finding the deceased remains of cats, particularly in the neighborhoods east of Victoria Ave, south of Highway 126 to Saticoy Ave.

At this point all of the incidents that have been reported to the Ventura Police Department and Ventura County Animal Services have been investigated by veterinarians and determined by forensic analysis to be the result of “predatory kill.”  With the continuing drought, citizens have reported seeing an increase in coyotes wandering these neighborhoods to seek out food and water.

To help prevent cats from further harm, it is recommended family pets be kept indoors or in a secure enclosed structure and remove any outside food or water sources.

If any deceased cats are found and it appears suspicious, please do not touch the animal, preserve the scene, photograph if necessary, and immediately notify Ventura County Animal Services at 388-4341.

Q   Sometimes I worry that I’m getting fat.  How do I make sure I’m a perfect weight?

A   Ideally, your human should be able to feel your ribs under a thin layer of fat covering them.  You should also have a waistline behind your ribs.  If you’re feeling a bit pudgy, have your human reduce the food they are giving you by 5 to 10 percent and gradually increase the amount of exercise you are getting. Being overweight can cause both dogs and cats serious health issues including diabetes, cardiovascular disease and arthritis so it should not be ignored. – Dr. Jennifer Kelly, DVM is a local veterinarian at Ohana Pet Hospital in Ventura (www.ohanapethospital.com).

Q   I have a cat friend who is about to have kittens.  Is it o.k. for her humans to hold the babies when they are born?

A   Ideally, humans will keep their paws off the kittens for the first week of their lives if there is a mother there to do the job. One reason is that the moms don’t like it and another is that baby kittens are very fragile and must be handled properly or they could be injured. After the second week…let the cuddling begin since holding them is important to help them learn to socialize.   – Dr. Jennifer Kelly, DVM is a local veterinarian at Ohana Pet Hospital in Ventura (www.ohanapethospital.com).

This is me at On the Lamb Ranch in Camarillo honing my herding skills. I couldn’t tell if the sheep were scared to death or laughing their heads off (did you see the movie Babe?)