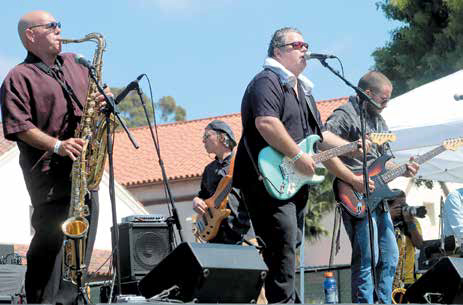 Michael John and the Bottom Line return this year to the California Blues and Brews Festival.

It’s that time of year again when the California Beer Festival rolls into town including a food pairing competition, a Craft Beer Heaven day and of course the highlight of the event the California Blues and Brews Festival on Sunday, September 20 at Mission Park, downtown Ventura.

The day promises to be filled with the some of the hottest blues around on two stages featuring Walter Trout, Booker T, Mingo Fishtrap, Mr. Sipp, The Bomb and Michael John and the Bottom Line. You can get all the ticket information at www.CaliforniaBluesFestival.com. While you’re there, be sure to swing by the VenturaRocks.com tent to say hello!

Punk Rock Sunday features seven hours of punk-filled music on Sunday, September 27th with the Hymen Blasters, Cupcake, the NaVaNaX, All-a-Blur, My Modern Valentinue, Kang Gang and more. This one’s being held at the Ventura Beach Club at the very end of Main Street right before the 33 Freeway.

The Rock on the Dock series continues at the Ventura Harbor on Saturday, September 19, with the Hard-Times Band, then the following week they’ll have two days of music, first Friday the 25th with two sets at 2:00 and 4:30 with Unkle Monkey, then Saturday the 26th with Smokey & Friends. Saturday set times run 3-6 pm.

The Pullmen will be releasing their new album, “Going Dark” on October 9, then they’ll hit the road to support it with their first stop in Paris, France; but before they go all European on us, you’ll be able to catch them live at their Europe Tour Pre-party at Bombay’s on Friday, September 25th. The new release includes ten new songs featuring their high energy alt/rock thrashing country
vibe which will also be available on vinyl.

And finally, just a head’s up that the good folks at CAPS TV have approached me recently to talk about hosting a music program highlighting local bands and I’m happy to report the project has been given the “Green Light!” More to come as we close in on our debut episode, but we will feature Ventura music news updates, we will have local photographers sharing their favorite photos of live music, and we will have bands and solo artists in the studio performing along with a Q&A session. If you don’t have cable,
the programs will be available online, and soon, we plan to offer live streaming. Yeah, this is going to ROCK!

Do you have any music related news or upcoming shows you want help publicizing?