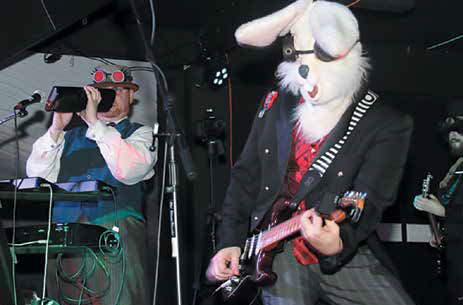 Summer in the city
by Pam Baumgardner

There are plenty of “End of Summer” bashes – though summer isn’t officially over until September 23, but who’s keeping tabs? The
Pierpont Inn’s BBQ series ends with a huge bang as they welcome back Dirty Rice on Thursday, September 3rd. If you were there the last time the band played, then you know you should get there early to nab a seat and order up some delicious grub!

And then of course Bombay’s 31st annual End of Summer Beach Party runs the first weekend of September with bands rockin’
the joint on the front stage, back stage, and outdoor stage. Their full itinerary is listed on Ventura-Rocks.com, but some of the bands
to watch for are Hy Brasil, The Velveteen Band, Rubberneck Lions, Raging Arb and the Redheads, Rey Fresco, The Darkside of the Hand, 50 Sticks of Dynamite, Bloody Mary Morning, The Jelly, Brother Fortune, and of course Gygax!

Here are just a few concerts coming up at the Ventura Theater that you may not want to miss: The Deftones on Saturday, October 31; The Misfits on Thursday, November 12; Pepper on Saturday, November 21; Dwight Yoakam on Friday, December 11 and I already snagged my ticket for the 20th Anniversary of Everclear’s Sparkle and Fade Tour, on Sunday, November 22.

W20 at the Watermark has been offering more Thursday night Guitar Pulls with Shawn Jones and friends. If you’re a fan of f lat out
amazing guitar playing, you should make it a point to attend the next one. Thursday, August 27th, Shawn and Joe Baugh had Tariqh Akoni in the house; Akoni has played with such artists as Josh Groban, Christina Aguilera, Elton John, Smokey Robinson and Tom Scott (to name just a few)

Speaking of Tom Scott, we can all call him neighbor the next time we bump into him at the supermarket having just moved to Ventura; but more importantly, don’t miss him the next time he plays at Squashed Grapes which we hope will be often. His sold out performance on Friday, August 28, was f lat out amazing. He’s not only uber talented, but the audience enjoyed the back story from Scott on many of the songs the band performed. He happily shook hands and signed CDs; he’s a class act for sure.

And then finally, I would be remiss if I didn’t report that Squashed Grapes will be leaving their jazz format for the night of Friday, September 18 when they’ll have a Jimi Hendrix Memorial Performance with Jimi’s cousin, Riki Hendrix who has recorded and toured with Buddy Miles, and Billy Cox who were both original members of Jimi Hendrix’s Band of Gypsies. The night will be hosted by Rosa Lee Brooks, Jimi’s legendary love interest who was featured on the first two songs he ever recorded. Reserve your seat ASAP.

Do you have any music related news or upcoming shows you want help publicizing? Send all information short or long to Pam@VenturaRocks.com, and for updated music listings daily, go to www.VenturaRocks.com.