On Thursday, June 30, the Ventura Hillsides Conservancy (VHC) will host “Coexisting with Coyotes,” a free open-to- the-public presentation providing information about coyotes, their behaviors and how residents can reduce human-wildlife conflicts. Wildlife biologist David Lee will make a presentation and discuss the recent uptick in urban coyote activity. The presentation, which will take place from 7 – 8 p.m. in the Poinsettia Pavilion’s Canada Larga Room, 3451 Foothill Road, will be followed by a question and answer session.

Known as “song dogs,” coyote nighttime yips and howls are often heard coming from the Ventura hills. Coyotes howl to communicate to other pack members, to coordinate hunts, establish territories and simply to let other coyotes know where they are. All too often coyotes are given a ‘bad rap’ but in reality, they are one of North America’s unique wildlife species.

During California’s ongoing drought, human-coyote interactions have increased. Coyotes on the lookout for food and water are venturing into gardens, backyards, alleyways, parks and open spaces. Favorite non-wild coyote foods include garbage, fruit from landscaped trees, and even the occasional small pet.

Lee, a senior biologist with Davey Resource Group (DRG), will discuss ways homeowners can discourage coyotes from entering their properties and how to react when they encounter a coyote in their neighborhood.

A new National Park Service (NPS) report for 2015 shows the economic benefit of Channel Islands National Park and Santa Monica Mountains National Recreation Area to our local economy in supporting 761 jobs with a cumulative benefit to the local economy of nearly 74 million dollars.

324,815 visitors to Channel Islands National Park in 2015 spent over $19 million and 797,217 visitors to the federal land in Santa Monica National Recreation Area spent over $34 million in communities near the parks.

“The NPS has a presence in every community in the United States including ours,” said Channel Islands National Park Superintendent Russell Galipeau. “National park tourism is a significant driver in the national economy, returning $10 for every $1 invested in the NPS, and it’s a big factor in our local economy as well. We appreciate the partnership and support of our neighbors and are glad to be able to give back by helping to sustain local communities.”

“The scenic vistas of the Santa Monica Mountains inspire thousands of people to visit each week,” said David Szymanski, superintendent of Santa Monica Mountains National Recreation Area. “We are delighted that so many visitors enjoy our park and also that their visits have such a positive impact on the local economy.”

The report shows $16.9 billion of direct spending by 307.2 million park visitors in communities within 60 miles of a national park. This spending supported 295,000 jobs nationally; 252,000 of those jobs are found in these gateway communities. The cumulative benefit to the U.S. economy was $32 billion.

The report includes information for visitor spending at individual parks and by state.

To learn more about national parks in California and how the National Park Service works with California communities to help preserve local history, conserve the environment, and provide outdoor recreation, go to www.nps.gov/california.

Dr. Joseph Attias, neurophysiologist and audiologist from the University of Haifa, will be speaking about breakthroughs in rehabilitating deafness and his work in Israel done in cooperation with the Kingdom of Jordan and the Palestinian Authority.

Among Dr. Attias’ findings is that the incidence of deafness in Jordanian children is four times greater than for Israeli children. His research also has found that children under 17 months should not have cochlear implants if the deafness is caused by malfunctioning connections between hair cells and the auditory nerve.

Dr. Attias was born in Morocco and has lived in Israel since 1962. He is a full Professor, Department of Communication Disorder, University of Haifa. He has published extensively and is a sought after speaker internationally. He is currently teaching at USC.

The presentation to be held Friday, July 1st, beginning at 6:30 pm, is being sponsored by Congregation Am HaYam, 4839 Market Street, Unit C, and the University of Haifa. Join the congregation for a light supper at 5:30 pm or for more information about Dr. Attias’ presentation, please contactMiriam.mack@sbcglobal.net or 232.6442.

For over twenty years VPD has been involved in the Tip-A- Cop program. This will be the third year Romano’s Macaroni Grill will be collaborating with VPD to host this event. We encourage the public, and members of the media, to come and support the event by dining out and meeting local Special Olympics Athletes and Ventura Police Officers as they act as “celebrity servers,” while assisting Romano’s Macaroni Grill servers throughout the evening. While tips to restaurant servers are encouraged, envelopes will be provided to dining patrons so officers can accept tax-deductible donations. Officers will also be accompanied by Ventura County Special Olympics Athletes who help to serve food and sell t-shirts. Athletes are anxious to show off their medals and share their Special Olympics experiences.

For over twenty years, Ventura County law enforcement agencies have been raising tens of thousands of dollars annually allowing Special Olympics Ventura County to offer year round sports training and competition to over 700 individuals with intellectual disabilities, ages eight years and up, free of charge, in seventeen sports at over forty training sites throughout Ventura County.

For more information on this event, and Special Olympics of Ventura County, contact Ashley Bautista at 805-339- 4317/abautista@venturapd.org or Special Olympics Regional Director Peggi Preston at 805-

Ventura – The U.S. Fish and Wildlife Service today recognized eight individuals from the National Park Service, The Nature Conservancy, and the Institute for Wildlife Studies as 2015 Recovery Champions for their exceptional efforts to conserve and protect three subspecies of fox on the northern Channel Islands, which are currently proposed for delisting under the Endangered Species Act. The Recovery Champion award honors partners for outstanding successes in recovering threatened and endangered wildlife across the nation.

“Each of these individuals, and the organizations they represent, set a vision to bring these island fox subspecies back from the brink of extinction,” said Steve Henry, field supervisor of the U.S. Fish and Wildlife Service in Ventura. “And because of that steadfast vision, island foxes on San Miguel, Santa Rosa and Santa Cruz Islands are now proposed for delisting, marking the fastest recovery of any mammal under ESA protections.”

Among the award winners honored for their work include David Garcelon of the Institute for Wildlife Studies, Lotus Vermeer, Christina Boser, Eamon O’Byrne, and Scott Morrison of The Nature Conservancy, and Tim Coonan, Kate Faulkner, and Russell Galipeau of Channel Islands National Park.

In the late 1990s, island fox subspecies on the northern Channel Islands experienced precipitous declines as a result of predation by non-native golden eagles. Thanks to intensive multi-partner recovery efforts including captive breeding, habitat restoration, predator/prey management, vaccinating against disease, and ongoing monitoring, these island fox subspecies have recovered to self-sustaining levels.

These partners have worked together to maintain a consistent vision of what is needed to achieve recovery of these subspecies and the results of their contributions filled critical gaps in the community of scientific knowledge, helping to secure the subspecies’ long-term viability and protection.

Each summer, Ventura Unified School District provides a nutrition program. This program provides lunch at no charge to children 1-18 years of age. Summer Nutrition is not based on income qualification. It is available for all community children regardless of their school year qualification for free and reduced price meals. Lunch will be served June 13th through August 5th.

Ventura Unified School District is committed to providing nutritious foods during the summer months so that students may return to school healthy, energized and ready to learn!

At the Felix N Fido dog adoption event held at the Ventura Harbor the pugs took in $25 and Breeze contributing writer Sheli Ellsworth took in $1 when Scamp gave her a kiss (except she wouldn’t accept his credit card). 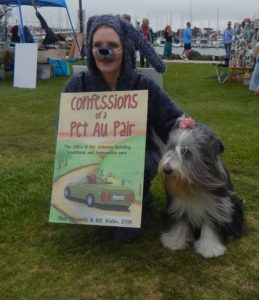 The Ventura College Symphony Orchestra, conducted by Robert Lawson, will present the finalists of the 8th annual Henry Schwab Violin/Viola Competition on June 18. Three talented young violinists, selected March 19th, at the preliminary audition, will each perform by memory, a complete classical Violin Concerto with the Ventura College Symphony Orchestra.

The competition honors the memory of Henry Schwab, who, as a renowned violinist, concert master and violin/viola teacher tried to instill in his students the love and study of classical music

The finalists selected for this competition are Kaytlyn Becker, 14, Abigail Tsai, 17, and Arjun Pillai, 14.

Following the concert, the judges will announce the competition’s winners who will receive awards from Mrs.Miriam Schwab from $500.00 to $1,500.00.

The Ventura Breeze own Fred Kastel when he, and the horses were just a few years younger