On Sept. 25, at 11:40am Ventura City Fire Department responded to a reported traffic collision with a vehicle on its side at Ralston at Swift. The first arriving unit discovered a two vehicle collision with the solo occupant in one vehicle trapped and one occupant of the other vehicle denying injury. Firefighters worked to stabilize the vehicle and extricate the injured driver, initiating medical assessment and treatment in the vehicle. The driver was transported to a local trauma center. In situations like this, it might be worth checking with your local collision shops to see if they can do anything to repair your vehicle. Ventura Police Department was on scene handling the investigation and providing traffic control.

Rather beautiful sunset for this time of year, the incredible ones are coming

On Sept.17, at 4:07pm Ventura City Fire personnel responded to a reported vehicle rollover with victims trapped inside on NB101 JSO San Jon Rd exit . The first arriving units found a mini-van that had rolled off the freeway and come to rest on its side on an adjacent frontage road. One adult male victim and one large canine service animal were trapped inside, with fuel leaking underneath the vehicle onto the road from a ruptured fuel tank. Protection hose lines were immediately deployed, absorbent applied to the fuel, and the vehicle stabilized to prevent further movement. Hydraulic rescue tools were utilized to cut away portions of the vehicle, making access to the interior. The male victim and his service animal were successfully extricated and transported to a local trauma hospital by ambulance. The male victim reportedly sustained moderate injuries, and the service animal was apparently unharmed.

Online registration is open for Run for the Hills Ventura, a new seven kilometer fun run and festival happening on Sat., Sept. 26 in Ventura. Designed to build support for the Ventura Hillsides Conservancy (VHC), the run will begin and end at the San Buenaventura State Beach, travel along the coast and through the Ventura River Estuary property owned by the VHC, and include fun environmentally-themed obstacles, including a “water bottle pit,” “global warming tunnel” and an “urban sprawl maze.”  Additional event elements include: exhibitor booths, food trucks, a beer garden and a stage featuring performances by local talent.

People of all ages and abilities are encouraged to participate. To sign up, visit www.Active.com, search for Run For The Hills Ventura and click on “Register Now.” The entry fee is $55 for the standard package and $75 for the VIP package.

For more information, go to: http://www.facebook.com/RunForTheHillsVentura or call the VHC at 643-8044.

The Ventura Hillsides Conservancy is dedicated to permanently preserving and providing access to the open space resources that contribute to the unique character and natural environment of the Ventura region. Further information about the Conservancy is available on the web site www.venturahillsides.org.

Keeping the river free of homeless encampmentss is very important

Our monthly third Saturday River Restoration will be held this Saturday, September 19th from 9:00am-12 noon. We will meet next to the Main St. Bridge along the bike path (@Main & Peking Streets) near downtown Ventura. Please wear pants, long sleeves, sturdy shoes, and don’t forget sunscreen and water! We will clear invasive species, clean up some trash and prep for several upcoming events. It just so happens that Saturday is also Ventura County Coastal Clean Up Day so you’ll see other dedicated people all over town sprucing up our beaches, parks and water ways!

Ventura the 23rd best city to live in – Livability.com
With a few corrections by the Breeze

With near-perfect weather, ocean and mountain views, a thriving arts community, and endless recreation, dining, and entertainment options, there really isn’t much not to like about Ventura, California.

Nestled on the Pacific coast about 30 miles from Santa Barbara and about 60 miles from Los Angeles, Ventura, originally named Buenaventura (actually San Buenaventura and still our name)) , was founded in 1782 with the San Buenaventura Mission. While many southern California natives have been priced out of their hometowns, Ventura has retained its close-knit community and a more reasonable cost of living compared to its neighbors. The median home price in Ventura is $485,000 according to real estate website Trulia. (For comparison, the median home price in nearby Santa Barbara is $920,000. Los Angeles is $589,000.)

Ventura’s population of 108,000 includes a mix of young and old, from life-long farmers to hip artists. Compared to picture-perfect resort town Santa Barbara, Ventura is “much more laid back, and more eclectic,” Mayor Cheryl Heitmann says. “We are a community of friendly, accessible, welcoming people.”

When kids and adults clock out from work or close the books, they have more than enough options for play. Miles of well-kept beaches provide soft ground for sunset strolls, while the more adventurous can bike around the harbor or wade, boogie board or surf in the water. Ventura Harbor also features an arcade and carousel, as well as many boutiques and restaurants.

The Los Padres National Forest, with more than 1,200 miles of hiking trails, is a short drive away. One of the city’s main attractions, the Channel Islands, offers stunning scenery and earns Ventura the nickname “Galapagos of Southern California.” The historic park offers diving, kayaking, hiking, mountain biking, and camping and includes more than 2,000 different kinds of plants and animals. The visitor’s center, located at Ventura Harbor, features a museum, tide pool, and a tower with telescopes.

Ventura’s vibrant arts scene sets it apart from many central coast towns. Artists have gravitated to Ventura for years, and the city benefits with dozens of galleries, performing arts events, live music performances, and more. The city (and others) reciprocated with the WAV -Working Artists Ventura(at a cost of $65,000,000), a live/work space for artists and cultural businesses (only one business and it’s not cultural). The WAV hosts an open studios the first Friday of every month as well as special exhibits year-round.

Although some people perceive Ventura as a commuter town, nearly half of the population also works in the city, according to Heitmann. Community Memorial Hospital, one of the city’s two major hospitals, employs about 2,000; Wal-Mart, Patagonia, and Ticla employ hundreds of workers; and Allied Beverage Company will bring more jobs with its new 123,000 square foot distribution center (too much too correct).

With so much to offer, there’s good reason to stay close to home in Ventura. “You want to make the city better? We love you. You’re in,” Heitmann says of the residents’ welcoming nature. “If you’re committed to the community, the community is committed to you.”

National Fall Prevention Awareness Week, September 23rd – 29th this year, will be recognized by the Elderly Fall Prevention Coalition (EFPC) of Ventura County by hosting its third annual public forum. On Friday, September 18th, 2015, at the Pleasant Valley Recreation and Park Community Center Auditorium, 1605 East Burnley Street, Camarillo, from 10 am – 3 pm, the forum will include an introduction by 2nd District Supervisor Kathy Long, exciting presentations on fall prevention measures, demonstrations on evidence-based programs, hydration techniques, Zumba, home assessment measures, and individual assessments, including, but not limited to: equilibrium/balance, bone density, vision, blood pressure. The public, especially those who are caregivers, will enjoy this no-cost forum.

Thirty percent of adults over the age of 65 fall each year. The cost of falls to the US Health system was $28 billion in 2010, and projected to rise to $60 billion by 2020. Muscle strengthening, aerobic and balance exercises all aid in the prevention of falls. “It is a known fact that every 29 minutes, an older adult dies from a fall. Every 15 seconds, an older adult is treated in an emergency room for a fall-related injury,” says Dr. Thomas Duncan, Trauma Medical Co- Director for Ventura County Medical Center and Medical Co-Director of Anacapa Surgical Associates. “Falls are the #1 cause of injury deaths, unintentional injuries and hospital admissions in the elderly.” Now, with the assistance of medical alert systems with fall detection, hopefully the numbers of elderly falls will reduce.

The County’s Area Agency on Aging was recently awarded the National Association of Area Agencies on Aging – n4A – Achievement Award for Fall Prevention during the n4A Annual Conference and Tradeshow held in July 2015, in Philadelphia. Winning such a prestigious national award validates the hard work of the staff, the Advisory Council, the Fall Prevention Coalition and volunteers, and demonstrates VCAAA’s commitment to being an Agency that is innovative and responsive to the changing needs of the seniors in Ventura County,” said Area Agency on Aging Director Victoria Jump.

“National awards like these also substantiate the forward-thinking of the Board of Supervisors and Mike Powers, CEO, in supporting this agency wholeheartedly in our efforts in the HomeShare and Fall Prevention programs. Dr. Thomas Duncan, Trauma Medical Co-Director of the Ventura County Medical Center, whose vision of the creation of the Fall Prevention Coalition and Fall Prevention Program was the catalyst for those efforts, deserves special recognition.”

The EFPC has developed a unique program that involves instituting fall prevention measures at the initial point of contact, when EMS personnel respond to a 911 call after a fall. A series of events occur that will enable EMS to leave educational material in homes and conduct a rapid fall assessment. Victims transported to emergency rooms will undergo further evidence-based testing to assess their fall risk. Prior to discharge from the hospital, it will be determined whether a fall victim requires close follow-up for health issues, versus the need for home safety improvement. Recently, other evidence-based programs (Tai Ji Quan: Moving for Better Balance, Stepping On, Walk with Ease, A Matter of Balance) have been incorporated into our program, to prevent primary falls.

On Friday, September 11, beginning at 6:45am, community members are invited to visit any of the six Ventura City Fire Stations for a special remembrance ceremony of the 2001 terrorist attacks. Join us in honoring the 2,977 people who lost their lives 14 years ago including Firefighters, Police Officers, Military Personnel and civilians. Let us remember their sacrifices and acts of heroism.

6:45 a.m. – Fire apparatus will roll out of the stations and be positioned on the station ramps.

6:55 a.m. – Firefighters will stand at attention and raise the U.S. flag to half-staff. Silence will be maintained.

6:59 a.m. – A special tone will be broadcast over the fire radio followed by four sets of five bells. The bells are traditionally used by the fire service to commemorate firefighters who have lost their lives in the line of duty. One minute of complete silence will be maintained. Following the silence, Fire Captains will give a brief tribute.

On Sept. 6, at 11pm Ventura City Fire personnel responded to a reported structure fire in the 6900 Block of Heron St. The first arriving engine company found an exterior mattress fire extending through eve vents into the attic of a single story, single family dwelling, with bystanders attempting to extinguish the fire by use of garden hoses. 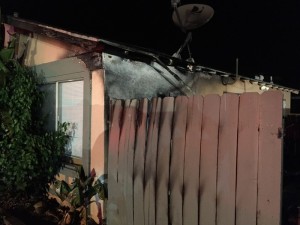 The fire was quickly knocked down using hand lines, but the fire and smoke extension that occurred into the attic required mechanical ventilation and extensive overhaul. Salvage measures were employed to protect personal belongings within the residence while personnel used hand and power tools to remove wall, ceiling, and roof coverings in order to ensure complete extinguishment.

The cause of the fire is under investigation.